Thought it would be appropriate to bundle these together, since both Skiploader and Neighborly revolve around the nucleus of one Tom Ackerman. If you haven't been acquainted with either, it would be of little surprise to myself, as well as an of the lucky few he's entertained and inspired.

Just south of Space Needle country lies Portland, Oregon. While the Sea-Tac scene was flourishing as all-get-out in the early '90s, their neighbors due south were pumping out some substantial music themselves, including but not limited to Hazel, Pond, Heatmiser, Sprinkler, and Skiploader. 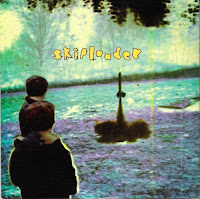 Spearheaded by Ackerman, Skiploader were something of a missing link between the last vestiges of the Seattle grunge movement, and today’s more emotive rock contingent (e.g. Nada Surf and Jimmy Eat World). The band signed on the dotted line with Geffen in the mid-90s, but released this single and a full length album, Sprainy, both for indie imprint Schizophrenic before taking the plunge. Despite Skiploader's amped-out and poignantly melodic, post-hardcore rock, their 1995 Geffen debut, From Can Through String, was woefully underpromoted, and the trio went splitsville shortly thereafter. Call it bad timing or what you will, but had they just come along about five years later... If you dig this, please investigate their albums, which I begrudgingly have to admit are likely to be found in a bargain CD bin. 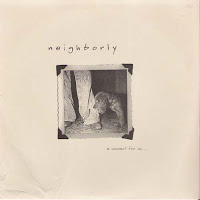 As for Ackerman's next endeavor, Neighborly, the apple fell mere inches from Skiploader's proverbial tree. Much like that band, Ackerman was able to retain the loud and slightly dissonant quotient in his new trio, which also featured Adam Orth on bass, who I previously introduced to you in my Shufflepuck posting this April. Neighborly released one album, Grass is Greener, which you can still get here, and is every bit as consistent with Skiploader's modest oeuvre. On this single, the centerpiece is “By The Way,” a bittersweet slice of life that somehow manages to stitch together such disparate themes as reverence for Dinosaur Jr (gotta love the Mascis reference!), spinning brodies on front lawns, and oh yeah…vomiting. Trust me, it works.
Tom Ackerman would later go on to play drums in Sunday's Best for the early portion of this decade.
Skiploader 7"
A. Name Dropping
B1. Unlimited...
B2. Name Brand Nada
Neighborly - A Moment For Us 7"
A1. By the Way
A2. Cut to Chase
B. Like a Car Crash
Skiploader: https://www14.zippyshare.com/v/lElIT4Pj/file.html
Neighborly: https://www14.zippyshare.com/v/uDqck4W7/file.html
Posted by spavid at 4:39 PM

More great stuff. This is one of the blogs that I truly look forward to checking every day for new unexpected treasures, and definitely things I not going to find anywhere else!!!! Keep up the good work.

Hello,
Thanks for all
Can you please repost these two singles?
Thank you very nuch
Stathis

Could you reupload the records? Thanks in advance!