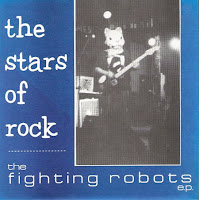 Here's a dandy lil' one-off single by a post-collegiate, Schenectady, NY trio dubbed The Stars of Rock. Cynical without being sardonic, the lead-off cut, "I'm Not Punk," is still downright bratty in it's admonishment of said genre, and furthermore overlooks the very DIY ethic the band partook in pressing this chunk of wax on their own in-house label. Not that I'm being critical or anything. With their often costumed and prop-laden live sets (from what I'm told), The Stars of Rock were probably the most amusing thing the Albany, NY-area scene had encountered since Blotto. Vocalist/guitarist extraordinaire Brent Gorton went on to some modest local success as a solo act, and later as prime mover for the wonderfully monikered Brent Gorton & The Tender Breasts.

The Sharebee links don't seem to work right. The page loads, but the links say "transferring" and never become clickable. Can you put up an RS link, like before?

Just updated with a Rapidshare link that should be functioning.