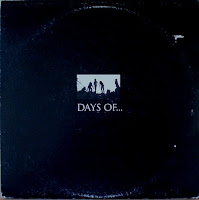 What would Wilfully Obscure be without a curveball now and then, especially when the band in question tacks on ellipses to their already oblique moniker? Days of...what? I just can't say, and apparently neither could these circa '86-'87 North Carolina noiseniks. Let's just say wine and roses and call it a day, huh?


What little I'm able to glean about the band comes entirely from the LP insert sheet, bejeweled with pics of several gig flyers of bands they served as openers for, including the Flaming Lips, Fugazi, not to mention proto-Superchunk luminaries Wwax, and the Slushpuppies, which I promise to dedicate a future posting to. The back sleeve is features a blowup of a flyer for their opening slot for the Angels of Epistemology - and we all know far those guys went.
Days Of... were akin to Squirrel Bait yodeling a mating call to Rites of Spring, though somewhat lacking the aplomb or exponential future influence of either. The quartets brand of distorto-hardcore is restrained just a smidgen to let some stray tuneful notions creep in now and again, with "Dreamgirl" being the most representative of this observation. The live tracks that wrap out side two are rough going, but Days Of... is still worth a...

hum, This is a very cool name to call an album, it means a lot, although is does not say too much. This is becoming confusing for me.
I just wanted to thank you because of the DL link.
I think I am going to Buy Viagra in order to have a nice time

I recently read Manchild 5, sort of a document of the Raleigh NC punk scene through the 80s, and Days Of... was one of the big take aways for me. I'd never heard of 'em, not surprising since they didn't release anything until 10 years after the fact. Thanks for posting this, it took a lot of google work to find something called "Days Of".

"Days Of..." was agreat band! I saw the several times, including open for 7 Seconds at a place called The Fallout Shelter in Raleigh, NC. It was the Final Show for that club, and AMAZING! Every square inch was packed with human beings. The lead singer was in the NC band Subculture (look for their "I Hear A Scream" LP) and guitarist Scott Williams was in a ton of influential scene bands too, including Second Coming; who kicked out swtiched singers and became Days Of... Both ended up in the Retro-Hardcore band Double Negative. Still pretty obscure when explained. Here's an interview for more details: http://doublecrosswebzine.blogspot.com/2010/09/double-negative.html

Yea, whatever happen to those guys.