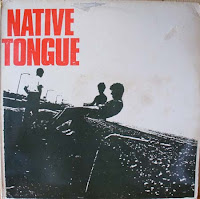 Sounds to me like Native Tongue obtained a copy of Gang of Four's seminal Entertainment LP, found religion, and decided to take a crack at it themselves. Maybe it wasn't as simple as that, but to my ears it might as well have been. Presumably hailing from Boston, MA, or thereabouts, Native Tongue were quintessentially post-punk: jagged riffs, intermittent chanted/sung vox, and so damn rhythmically intense it's not funny. Some of their material is so derivative that I'm tempted to specify which Gang of Four songs their copping, but I'll stop just short of that. Nevertheless, "Speaking In Captions" lead-off riff is just as infectious as U2's "I Will Follow," or even "Smells Like Teen Spirit." Overall, this ep is roughly as approachable as any given Pylon record, if that's your thing. N/T have a Myspace page, where I believe you can listen or even buy some of these songs and more. Might not be a bad idea to head over there, given the annoying, omnipresent pops and crackles of my rip. This was released on Detente Records, which was distributed via the esteemed and still very much in operation Newbury Comics. Lastly, the band thanks none other than Roger Miller on the lyric sheet.

OK, this is from two years ago but they were a great band. They were from Revere, just outside the city. The interesting thing was they'd set the drums up front, in between the guitar and bass players since the drummer handled some of the vocals. I agree with the Gang of Four influence and Mission of Burma were certainly an inspiration for them, as well. There was a collective of post-punk type bands called Propeller and, while Native Tongue weren't really part of that, there were definitely musical similarities.

Have you heard their album from '83? Also worth checking out.

I was a roadie for Native Tongue for many years. It's a shame there is no video of them— they were great live. Try to find their full length album, "Yowl". Every song on it is great. I think they have a fan page out there and one of them is on Facebook. And ah, Propeller, the good times. Al, do you know anything about the band 21-645? I saw them play once at the Channel and they did that song 'Babble'. Never saw or heard anything about them ever again except Clint Conley told me he saw them a few times.