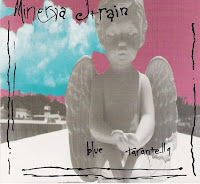 In the burgeoning Chapel Hill music scene of the 1990s Minerva Strain swung from the lower rungs of the indie food chain. While out of step with the relatively accessible Superchunk and Archers of Loaf, Minerva Strain were more in line with the skewed, distorto-rawk of homies Polvo, not to mention early Flaming Lips. Brandishing dropped, if not completely untenable guitar tunings, coupled with a shrill, art-damaged aesthetic, this crew actually carried a faint melody now and then, best exemplified by Blue Tarantella’s “Jupiters,” and “Seven Seconds Underground.” Call me crazy, but as for the band’s predominately “experimental” vibe, I like to think of Minerva Strain as an unrelated precursor to Robert Pollard’s haywire, post-GBV spin-off bands. Some of Tarantella's song titles look like they’ve been swiped from any given Mars Volta record, but trust me, I’m not complaining.


Blue Tarantella features a Public Image Ltd. cover, but I’ll let you figure that out for yourself. Enjoy (or not).

Jesus! I've been looking for this record for a very long time. Thank You.
swing by when you have time...

OMG! Thynks a lot having reupped this!

any chance you could re-up one more time? cheers, thx a lot!!