Greetings. This post is what I anticipate to be the first in a five part series that takes an in-depth examination into the various recording projects involving one Mac McCaughan before he went on to helm one of the most successful and prolific indie rock acts of the '90s, Superchunk, not to mention the established Merge Records label. I narrow the focus of this series to Mac, not out of disrespect to the other Superchunk alumni, rather the empirical fact that for the most part, Mac's pre-Superchunk tenure was the only one properly and thoroughly documented.

Before proceeding, one Mac footnote I won't delve into is A Number of Things, technically his first rock and roll, or to be more precise, hardcore punk venture. You can indulge your curiosity by clicking the hyperlink above. 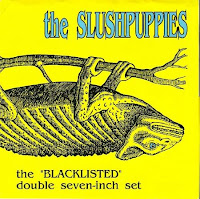 The three-member Slushpuppies were one of two bands, the other being Wwax (more on them in the next installment), Mac was simultaneously commandeering in the mid-to-late 1980s. The band had the luxury of woodshedding in a barn in Chapel Hill during their formative years. Due in part to Mac's NYC college priorities, the Slushpuppies performed live irregularly, but impressively, managed to open up for Fugazi on dates in Washington D.C. and Pennsylvania.
From a musical standpoint, out of Mac's four pre-Chunk projects, The Slushpuppies vigorous punk-pop offered the most accurate indication of the trajectory Superchunk would initially take. There were a handful of 'Puppies recording sessions, the first of which resulted in an eleven-song cassette dubbed, Big What? From the liner notes ensconced in the Blacklisted double 7" ep, my understanding is that the five selections within were culled from subsequent sessions. If you're a true connoisseur of the first two Superchunk albums, Superchunk (1990) and No Pocky For Kitty (1991), Blacklisted will prove to be a revealing, not to mention entertaining prequel. Enjoy.

A much weaker earlier attempt at same (now I am spotting some typos...)
http://www.ncmusichistory.com/2006/04/slushpuppies-assimilation-1987-from.html

Any possible of a reup?