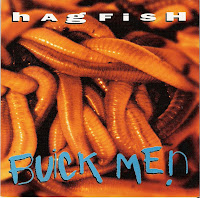 Buick Men was the first of Hagfish's trifecta of proper albums. Released independently on the Dallas based Dragon Street Records in '93, It contained 19 blistering numbers, without a single one exceeding the three- minute mark. This cd would soon become the rarest and most coveted of all Hagfish releases, due in part to the modest national following they would garner via their second album ...Rocks Your Lame Ass. Rock's was in fact Hagfish's first and only major label offering. Roughly half of Buick Men's songs were rerecorded for this album, and were improved substantially I might add. An even better album, (self-titled) followed in 1997 on the esteemed Honest Dons label. The group is now defunct, but a handful of posthumous cds have been released. A "relapse" reunion album was supposed to surface in '04, but alas, bupkis. Just FYI, Buick Men was commanding up to $100.00 Ebay a few years. It's collectiblity may have diminished, but it's scarceness hasn't.
01. Happiness
02. Stamp
03. Flat
04. Secret
05. Gertrude
06. Moda
07. Sad
08. Trixie
09. New Punk Rock Song
10. Disappointed
11. Minit Maid
12. Hose
13. Shark
14. Lesbian Girl
15. Herve
16. Aquarium
17. Mouse
18. Ambulance
19. Land Shark (alt mix)
https://www58.zippyshare.com/v/OEGA4mpy/file.html
Posted by spavid at 6:18 PM

My band Truck Stop Love played with Hagfish in 1993. I believe the show was in Eau Claire, WI. It was a Great Show. Check us out sometime. Our drummer was Eric Melin who would later go on to be in Ultimate Fakebook

Thanks for the posting! I used to have Buick Men on cassette and it vanished somewhere over time. About 7 years ago I went to Ebay as you mentioned to get the CD and got outbid around $50. I am not a collector, so $50 was more than enough for the music. The best I could get was the Happiness promo, which is nice, but not as nice as the entire CD.

I would have to repectfully disagree about their rerecordings being better. While the sound and editing is perhaps better on a technical level, I almost always prefer the original recording of any band. It's hard to describe, but the music just sounds more raw and passionate to me. I personally believe that it's because they were still regular guys trying to make it, rather than having a big record deal.

An example of this is the Nixons local album Halo which they rerecorded most of into Foma. To me the renditions of Sister and Wire don't sound nearly as passionate.

lets see i have probably one of the only copies of hagfishes first demo tapes made before george and tony were in the band plus some practices.my best friend james newhouse was there first singer who died in a car wreck in oct. of 94!!!! thought about putting copies up on ebay if anyone interested and not for no 50 bucks either.

Anyone ever notice what "Buickmen" really spells out?
HINT: F*ckMe

Just discovered Hagfish today and this stuff is so great. Loving the Allness of it.

Can you please re-upload? Thanks in advance! Your blog rules!

Hey, Rich years ago I picked up an album (maybe a cassette tape) at an Op Shop by a band called Truck-Stop Love, maybe your band but I can't for life of me remember the album name. I had it for a couple of years & I think I quite liked it but I couldn't get hold of anything else and after I lost it in a move after a while I forgot all about it until I read your comment, Now I'm like damn, I've got to chase your stuff up again. Any hints for where to get your music?