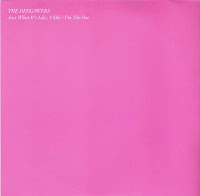 Yet another band that I probably wouldn't have been exposed to had I not spun rekids at my college radio station. The Seattle based Deflowers' debut album, Shiny New Pony, fell into my lap right around the time this 7" was minted. The recording credits, going to none other than Kurt Bloch (Fastbacks!) should be a pretty obvious clue that these guys rawk! It's all here - vigorous punk-pop, slashing power chords, solid melodies... These three taut numbers belie a raw, raucous underbelly, and boy is it fun!


The Delowers give us a choice Lemonheads cover here, namely the relatively obscure "Uhhh," which appeared on the 'heads debut, Hate Your Friends.

Wow, good one. Thanks a bunch for this, Armchair Martian, Rollkicker Laydown, and the Nubs... and many others.

Isn't it funny how when we think we've heard all the best records from a period, there always turns out to be more.

Hi, it's me again, no, the other michael. The name was my idea though I have no idea why. I was the original drummer of The Deflowers prior to joining Gnome. We recorded a four song demo at Hanzick Audio (sp?) that came out pretty good but was only available on cassette. Chris Martin later went on to form Kinski with his former wife Lucy.