Couldn't think of anything more fitting for Valentine's day. 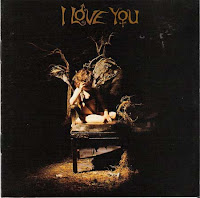 Rarely would you find a band in late '80s Los Angeles that dipped their collective toes in their fair city's psych-revival movement and in the far more lucrative Hollywood metal scene to boot. Even rarer would you find an aggregation to pull it off with as much class and charisma as I Love You did. With roots in Florida band the Sinful Pigeons, the members made their way to the left coast to reinvent themselves as I Love You. After a handful of compilation appearances and a live ep (which I'll get to in a moment) ILY honed their chops convincingly enough to attract the bigwigs at Geffen Records, who issued their self-titled debut in the year of Nirvana, 1991. Straddling the fine line between the burgeoning alt-metal movement and their own recipe of retro-fitted rawk, the band's debut also serves as their defining moment. Chris Palmer pulls off many an impressive Morrison-esque maneuver, with Jeff Nolan liberally indulging in jammy axe solos, stopping short of a wank-fest. For it's era, I Love You's supernatural and religious references were something of an anomaly, but once this quartet's collective mojo lured you in, the pleasure wasn't the least bit guilty. 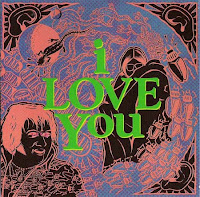 On their preceding, scalding-hot live ep from 1989, ILY exude a raw, guttural panache, utterly lost in the translation to their Geffen debut. Informed by equal parts punk and psych (at this stage in their career anyway) ILY eke out a handful of bristling originals, as well as a smoldering rendition of Cream's "S.W.L.A.B.R."

In 1994, I Love You issued the dramatically different sounding All of Us, and wasn't heard from again until some reunion shows in 2007

Wow, man! You absolutely rule for including I Love You on your blog. I used to have this CD and don't know what happened to it...I think my ex-wife probably threw it out. lol

Don't know why this disc wasn't popular, as there's some great music on it. I never heard the live EP, but the debut disc has some great guitar tones, hooks and melodies. "Hang Straight Up" was a cool single, but the album is deep with strong tracks. Thank you for spreading the word on this band.

I did a little blurb about them on my music blog, The Sonic Abyss (www.thesonicabyss.com), but no full album review as I've not been able to track it down. Cheers and thank you again for a cool post!

Thanks for the links. I have the cds but could never find the live ep.I saw them at the Coconut Teaser on Sunset back in the day.One of the best bands of the era.

i have been looking for the Live EP forever. any chance you can re-upload it? infinite thanks! sasha

this band blew right by me. any chance for another re-up thank you!!

Links down for being too old. Please re-up if possible. Thanks for all the great postings!!!!

Thanks for the kind words. Don't remember when I stumbled on this review but if it means anything to you your words really lifted my spirits this morning. I played drums with ILY, joining after the live ep and the 9 years I spent (and 2 Geffen albums) were very special to be a part of.