Special bonus for this installment of Singles Going Single. I didn't think I could do justice to Gnome by merely uploading their lone 7." Gnome were a Seattle four-piece that knocked around Seattle during the early nineties. By 1991, I had familiarized my self with all the Sub Pop bands and began investigating other Sea-Tac bands and labels. One of these labels was C/Z Records, who included on their roster Coffin Break, Skin Yard, Treepeople, and Gnome. 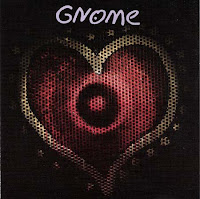 I took a completely "sound-unheard" chance on Gnome's debut Six-Hi Surprise Tower which I believe came in 1992. If I remember correctly, the band christened the album title after an item in a dessert/confectionery mail-order catalog. I just hope it wasn't of the fruitcake variety...anyway. C/Z positioned Gnome as "bubble-grunge." While they weren't nearly as flailing or wired as Nirvana and Soundgarden, Gnome possesed a lively sense of abandon all the same, not to mention pop-savvy. I always thought they gravitated more to the power pop, end of the spectrum, and in fact Jon Auer of the Posies shared mixing duties on the album with Phil Ek. Gnome were if anything, unique. To this day I'm still trying to discern what they owe their sound to, but I think singer/guitarist Loren Evans is the biggest part of the equation. Six-Hi... is a quietly charismatic album if there ever was one, and if you're anything like me, you won't truly sense it's brilliance until long after your initial listen. 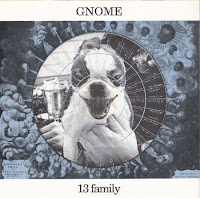 The "13 Family" single on Blossom Records predates the album, I'm estimating by a year (no copyright date provided for either this or Six-Hi). "13 Family" is a different recording than the LP version, and I can't help but wonder if early incarnations of the album's other nine cuts are languishing in a shoebox somewhere. The b-side, "Dog Energy" is exclusive to this wax.


Gnome went onto release a second album in 1993, Fiberglass, and soon after a single, Pop Cred./Punk Sens. The band later recorded an ep titled Juicy Mommy, which never saw the light of day : ( Loren, or if anyone else related to the band reads this, please get in touch!

Not that this helps but the Dog pictured on the picture sleeve to the single was named Blossom. Nice dog.

Yep, that was Blossom, who was Ron's (the bassists) dog. He used to love to play with my cat Ted. The picture was taken in Loren's back yard which soon became my backyard after I married (the guitar player) Dave's sister (you follow so far?) I'm Mallette and I played drums on Six-hi, Fiberglass, and half of Juicy Mommy. My son currently jams with Loren's son who were both coincidentally named after the same rockstar - Nash Kato, and thus the great wheel of rock turns...

Hi everyone! have you some information about "Juicy Mommy" EP? I love Gnome..

man gnome kick some serious booty! :D
i was wondering if you could upload the album Fiberglass as well i can't find it anywhere..