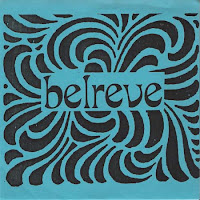 This one has always been a huge personal favorite. I became acquainted with Belreve via a split single with Guided By Voices, probably around 1994. Not a power trio, so much as an anti-power trio, Columbus, Ohio's Belreve were short lived and sadly, less-than-prolific. In fact, their recorded discography boiled down to a mere seven songs! The fact that the band was spearheaded by Matt Reber of New Bomb Turks is surprisingly irrelevant given Belreve's modest by comparison motif. "Nothing," and "The Sky Is Falling," are unabashedly seeped in lo-fi, four-track goodness, brandishing feedback-ridden instruments that belie their chiming, indie guitar-pop. Belreve worked their magic by fusing sweet C86 style pop with the prevailing sound of the American indie scene of their era. And the results? Nothing less than brilliant.


These two songs were rerecorded for a seven track ep on Slumberland Records (link above), which also contains the rest of their meager output. Belreve, I barely knew ya.
a. nothing
b. the sky is falling
https://www108.zippyshare.com/v/pCUyZK5t/file.html

thanks bro!! do you have a copy of an album of "holiday flyer"(any album) and "So" - Horseshoe In the Glove.

-i'll upload some of your good stuff on my site.... thanks.

Matt used to date a girl from Buffalo around this time and would visit us at HOTH and The Old Pink often. Super guy!

I have to completely agree with that. I’ve had some friends that have used matchmaking services ..