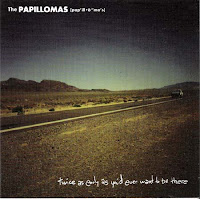 Victoria, BC's Papillomas were just one of scores of hot indie bands emanating from the Canadian border throughout the '90s, however this promising quartet didn't mean squat in the States, unless of course you were an avid listener of CBC radio like myself. Taking subtle cues from yanks like Pavement, For Squirrels, and Archers of Loaf, the Pap's brand of roughewn, mid-fi indie-rawk had a certain distinction of it's own, due in large part to Michael Kissinger's slightly offbeat timbre. Twice Is Early... is no through-and-through masterpiece, but some of the choicer selections, namely "Everything is Tired," "Wisconsin Camera For Higher," and "Cross Face Chicken Wing" are worth hitching the ride for. Preceding this album was the Papilloma's debut, Corolla, while 2001's When Years Were Bee Stings ep was the band's parting shot. Good luck trying to find any of them, because you'll probably need it.

This can now be found on Apple
Posted by spavid at 7:28 PM

Could you re upped the line please?

The Papillomas catalogue is on Spotify and Apple Music... check it out.