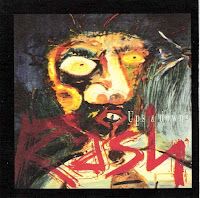 From Brisbane Australia they came, and profile-wise their audience sadly didn't reach much further than Oz. In the mid-to-late 1980s, The Ups and Downs released a bevy of indie singles and two strong albums, Sleepless in '86, and Underneath the Watchful Eye two years later. (The former can be obtained here). Their sound was classic anglophile modern rock, with lots of ringing guitars and a faintly melancholy undercurrent.


The 1991 Rash ep, available on Nettwerk Records in North America, was their last gasp, and although I'm likely in the minority here, I found it to be their peak moment. Rash plot the Ups and Downs on a decidedly more commercial path, but with the glossier veneer came sublime, melodic gems like "Jack," and "Untie Ian." This ep was a bittersweet proposition in all respects, from the contemplative songs that encompassed it, to the sobering realization that there would be no more where this came from.

Nice. I love "Ups and Downs", but had not heard anything after that. This was eye opening... and a good EP. Have you ever seen the 2nd album anywhere?

I meant to say I love "Sleepless"!

I Agree. Rash was their tip top peak. I lost my CD of this years ago. I somehow missed completely the second album, any suggestions on where to find it?

Actually 'Sleepless' was their high watermark, I absolutely loved that mini-lp. Their first album "Underneath The Watchful Eye" was just as good, but suffered from that 80's over production ... if only Gil Norton wanted to produce them.

They were great live last night!