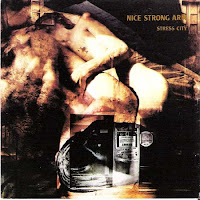 To some people, Nice Strong Arm were just another noisy post-punk band on Homestead Records. My first encounter with them came courtesy of college radio in the early ‘90s when I was at an impressionable age . Specifically, the song that lured me in was this very album’s “Desert Beauty Bloom,” and it was a tremendous revelation. With it’s lofty escapist sentiments, abetted by a sonic fusion of maelstrom and melody, “Desert Beauty Bloom,” went that much further in legitimizing my increasing dedication to indie-rock. Stress City, along with albums/singles by dozens, if not hundreds of bands that flew under the collective mainstream radar, motivated me to gradually forfeit nearly a decade’s worth of heavy metal and classic rock schooling. Everyone says that Nirvana killed hair-metal. I’d argue that Nice Strong Arm proved to be damn near effective as well, at least for me.

New York’s NSA opted for a dreary foreboding landscape for many of their songs, and Stress City’s ten selections are certainly no exception. “Desert Beauty Blooms” is relatively hopeful, but I think I’ve commented enough about this song above. Although much of the remainder of Stress City is less than immediate (to say the least) it’s still worth the investment.

Lead Arm, Kevin Thompson would later helm the much mellower Timco, but we’ll leave them as a subject for another time.

Hey Neal, Nice Strong Arm played Buffalo in support of this album. They were really excellent. There were 4 people in attendance that night at the River Rock - the 3 of us who showed up and the soundman (I don't think the opening bands even stuck around). I remember the bass player bitching about a speeding ticket they got somewhere in central NY. They were much better live than on record, but Stress City is still pretty good. Keep up the yeoman's work.

I remember looking for (and finding) this album some years ago, because the Pittsburgh band Hurl covered "Amnesia" on We Are Quiet in This Room. It's a shame that this disc has pretty much fallen into obscurity.

Before they moved to New York, Nice Strong Arm had been based in Austin, and before they made Stress City, they made Reality Bath, an LP I can recommend most highly.
While there are some skronky noisy parts Reality Bath is most distinctive for this thin patina of white noise with which they have coated their indie rock. The whole thing is kind of like Throwing Muses with megaphone vocals, and with atmospherics like Drag City-era Pavement

Like S. Sicty, it's long out of print, but I know you can find most of the tunes on eMule.

I'm just listening to Swingset off Nice Strong Arm's Mind Furnace album, which I listened to over and over back in the early 90s. Googled their name out of interest and found this. Delighted to find at least another four people who rate the band.

The file is gone, but that's okay. I've been reminiscing about this band recently. My band played with the a couple of times. They were awesome. Used to tour in Caddy with a trailer if my hazy recollections are correct.

P.S. Love this blog by the way. Just found it today and will by sharing it with others.

Thanks CS! Always glad to have a new reader. Wish I had seen NSA.

NSA came to Chico, CA in early 1989 in support of "Mind Furnace" I believe. I was the college radio production director (KCSC) and I put together a recorded promo announcing their imminent arrival. I was very excited about them coming to our small town and they did not disappoint. Put on an amazing show in the packed Burro Room that some still speak of today.

Remember seeing them play on top of the Republic Bank parking garage in downtown Austin sometime in the late 80s. Awesome show! I remember sitting on my skateboard, it was cold and windy, and I was tripping. Skated down the parking garage after the show. Great times.

Also, I was at their place over on the east side, I'm thinking 4th street just east of I-35. It was a warehouse space, and that was not the cool hipster area it is today. No one lived there but a few bands and artists. I remember seeing that painting of the people in a noat on the wall. The one that served as the album cover.

Anyway, I'm rambling. Austin was amazing back then.

Coming really late in the game, but here goes.

32 years ago, my friend Leslie and I made the trip to see Love Tractor play at a venue 90 miles away from my town; there was a handwritten note scrawled in magic marker on the entrance: "Love Tractor had to cancel to-nite." We drowned our sorrow in cheap beer and made the dejected drive home.

But just two weeks later--I picked up Nice Strong Arm's "Mind Furnace." Boy did this album give and give that endless summer and made up for my earlier disappointment. Complete with bizarre, striking cover artwork by Greer Lankton, which probably was alone a reason to purchase the album, I cannot think of a more influential and unforgettable album and band for me from that era. NSA wasn't the best band of the late 1980s, but they were thoroughly original and life-changing for me. I'm glad to know that others appreciate this band! Never having seen them live, this short video helps me understand also why they also put on a legendary, head banging show of goth inspired noise rock.

Oh and here is the video gem. So good! https://www.youtube.com/watch?v=7-M-pzy1fg0