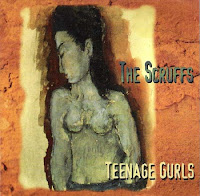 Over the years, many a power pop-centric music scribe/audiophile has espoused the "no-home-should-be-without-one" notion regarding the 1977 debut album from Memphis' Scruffs, Wanna Meet the Scruffs? The updated Merseybeat that occupies that album's grooves is perhaps on par with the best of the Raspberries output, but certainly not to be outdone by the first two Big Star albums. To this set of ears, Wanna Meet... isn't a masterpiece by any stretch, but as Joy Division were to goth, and what Black Sabbath were to heavy metal, The Scruffs weren't the pinnacle of the proto-power pop movement, rather they were one of the fortunate innovators. Innovators in this case that hardly got their due I should add.


Wanna Meet the Scruffs? has for the most part been back in print since the late '90s. With renewed interest in the band some 20 years since that album graced shelves, the wise entrepreneurs who helmed the Memphis based Northern Heights Records, excavated the Scruffs vaults, and in 1998 released the bands second, and theretofore unreleased LP, Teenage Gurls. Sporting a logical progression from Wanna Meet..., the followup didn't dramatically jostle the proceedings, but the punky "Rock 'N Roll Heads" and "You, You, You," pointed to what contemporaries like the Nerves and Undertones were about to unleash.


Pound for pound, Teenage Gurls is just as worthy as it's lauded predecessor, and not a bad place for the uninitiated to start with. As an added note, The Scruffs recently reunited, and released a respectable album in early 2007, Pop Manifesto.


Now available from Amazon downloads and iTunes.
Posted by spavid at 7:22 PM

thanks for this, and the other great posts on your blog.

i have that cd,just about to list it on Ebay in fact. i also just sold the"Wanna Meet The Wake Ups"cd for 99p! i just cant understand the legendary status afforded this band for the life of me though. especially given the fact that they have one of the worst singers ive ever had the misfortune to hear! i think they are just dreadful,even their"legendary debut album.i tried 3 albums worth to try and"get it" but i dont. its the same wioth Big Star for me,and to a lesser extent with The Raspberries.Well,,a few songs anyway;-)
im a huge Cheap Trick guy though,so dont worry! hehe

I think Wanna Meet is a fine album.

No, the vocals aren't the greatest, but that voice was the mid-70s voice they were all going for in Memphis. Similar to Alex Chilton's Ork records/Like Flies period.

The show-stopper on that album was "My Mind". Also great are: She Say Yea, Tragedy, and Tommy Gun. And the non-LP single "Teenage Girls" originally from the wanna Meet sessions, featured here.