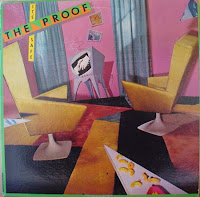 I was damn-near surprised to see that this gem of an album never caught the watchful eye of some of the kingpin power-pop blogs out there. Surprised if only for the fact that The Proof's It's Safe album was released under the auspices of a major label no less, in this case the venerable CBS Records. To be more precise, It's Safe was born into the world on a tentacle of CBS, Nemperor Records, most notably home to power-pop, leather-tie traditionalists The Romantics.


The Proof's lone-lp is overflowing with spunky (not punky), rhythmically aware new wave-inflected pop, that could have easily gone head-to-head with such period contemporaries as The Hawks, Quincy, and to a lesser extent 20/20. Assuredly, this quartet was yet another major-label fatality of their era, right along with some of the aforementioned. For shame...

This was one of my favorite LPs from the new wave era, thanks much!

Glad to hear that I was able to fulfill a request. I was unfamiliar with The Proof album when I bought it, rather I just heard highly of it.

the proof were a great band from New Jersey they recorded a never realeased follow up with Mick Ronson as the producer. Three members later went on to form Private Sector a New Order infuenced pop dance band that was very popular on the Jersey shore for much of the eighties

I'm delighted the Proof's not completely forgotten. Actually, the "follow up" was only a four-song demo and it was co-produced by Mick Ronson and Eddie Offord (I hope I spelled his name right!).

I listened to this album just about every day as a teenager. The songs stick in my head to this day.

I was in a Chicago new wave band that used to cover some of their songs. I used to love The Proof. I stumbled across their album in the cut-out bin of record store around 1980 and got heavy into it for a while. At the time I thought they were highly original; when I listen to these songs today they sound clearly derivative of The Cars and Off Broadway. Don't know why I didn't hear it then.

I booked this band into City Gardens / Trenton NJ a few times back in 1980. They were always well received - back then - not too many bands could go to a club and only play original music, but you could at City Gardens. They were as good live as on the record. Someday, someone should re-release this as a cd or even on vinyl - add a few bonus live tracks if they exist, or just add that 4 song ep follow up !

I learned of the Proof from a local band that covered them in Nebraska in the 80's. One of the top 80's albums in my book. Shame they didn't record more.

Hi, I was a huge proof fan and still am, I first seen them live opening up for Pat Benatar in Toronto. I would love to have any recordings /video you have of them. They were so tight and solid live and the bass player had such stage presence they were too cool. Are the members still active and playing? So much talent between them. Thanks, Alan.

Could you re-up this one, please?

omg. thank you!
i've just started to re-assemble my stereo system - it's been in storage for the last decade. am looking forward to listening to some old vinyl...especially this lp!

I have my original LP!!
Its a great listen...I first saw these cats on The Uncle Floyd Show...they were totally part of my junior and senior years at HS!!

I hear them sometimes on WCOM-FM in Carrboro NC...they're a Friday afternoon staple

Any chance you could reup this for the good folks at The Listening Post?

Probably not, because it’s available on Amazon music now. Probably other places too.