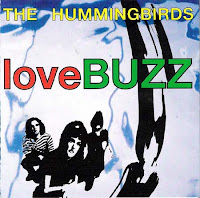 An album as thoroughly excellent as the Hummingbirds loveBUZZ should not warrant a post on a blog dedicated to lost and overlooked records. Ideally it would be revered and ubiquitous, as say Matthew Sweet's Girlfriend. In other words, loveBUZZ should've/could've been a staple. Hailing from Sydney, Australia The Hummingbirds had the backing of a major label (actually Rooart Records, a big Oz indie co-opted by Polygram) and production of their debut album courtesy of the near-legendary Mitch Easter. The album was a modest success in their home country, but with the exception of college radio tanked Stateside.


As usually is the case, the music speaks for itself. The ceaseless, Rickenbacker jangle that permeates loveBUZZ, is paralleled only by the Hummingbirds co-ed harmonies. Allanah Russack is the dominant voice here, and although it's tempting to assimilate the Hummingbirds with contemporaries like the Primitives and Darling Buds, loveBUZZ makes that virtually impossible given it's depth and sonic splendor. In more recent years, the band has been represented with an official "best of" compilation, but this album plays like a veritable greatest-hits album in itself. The ever nagging melodicism of "Alimony," "Word Gets Around," and the album's 'big' single, "Blush," anchor eleven more could-have-been universal classics, making loveBUZZ downright vital for power-pop fans and otherwise.

This is such a great record; I remember thinking when I first bought my copy that the cover (for vinyl) just looked wonderful with the colors and everything. It just kind of jumped right out at you where it was impossible to not buy it. Why do you think all Australian vinyl sleeves looked so good?

I recently passed on buying an additional copy last May at a record store out in San Diego. 3 bucks and now I'm kicking myself because it would've made a great gift for someone over the holidays.

Yep, not a bad record I remember well from my Uni days. Do you like the Clouds? Very surprising to me that they never took off in the States.

Yep, great album. Did "Into Your Arms," the song the Lemonheads covered, appear on any of their albums?

I've heard only 2 tunes from these guys and really liked them, but never found anything else. Thanks so much for posting !!

And you managed to namecheck Matthew Sweet and the Primitives...been looking through my record collection?

Totally great album, you've said it all. Bought it the day after I first saw them and still listen to it regularly.

It's Three in the Morning. Although Thee does have a nice medieval feel.

Brilliant album, it’s great that you’ve given it some recognition. Wonderful songs and the way the vocals of Simon, Alannah & Robyn intertwine is just magical. As you say they had major label backing (RooArt was set up by Chris Murphy who was the manager of INXS), resulting in a decent budget for the recording of this album. The relationship between the band and RooArt ended up going completely off the rails, to the extent that Robyn St Clare shaved her head the night before the photoshoot for the cover of the 2nd album Va Va Voom, she knew it would make the album less marketable and annoy Chris Murphy. The original deal with RooArt was for 6 albums, it’s unfortunate that they only got to make 2. Also, Into Your Arms as mentioned by Robert above is actually a Love Positions song (Love Positions were Robyn St Clare & Nic Dalton).

I loved this album! Strong all the way through.

"Also, Into Your Arms as mentioned by Robert above is actually a Love Positions song (Love Positions were Robyn St Clare & Nic Dalton)."

Thanks for this one!