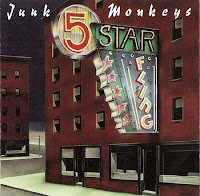 Detroit's ingenious Junk Monkeys were under everyone's noses (or more precisely in used bargain CD and tape bins, he he) during the early '90, but few actually took the 'fling,' so to speak. Perhaps the best Detroit-based band of their era, the Monkeys doled out raw, thrashy rock 'n roll with a decidedly unabashed nod to the Replacements. Their 1993 follow-up to this slammin' set, Bliss, may have been their most consistent and accomplished album, but it can't touch Five Star Fling, in all it's visceral, devil-may-care glory. An unlikely Who cover is thrown into the mix as well, but it's originals like "Sad Letters" and "Skippin' Stones" that dazzle the most.


Incidentally, the Junk Monkeys were signed to the Metal Blade division of Warner Brothers simultaneously with the Goo Goo Dolls when the latter's integrity was mostly intact (and in my opinion, quite remarkable at that - check out the Goos Jed and Hold Me Up for further convincing). Keep your eyes peeled for more Junk Monkeys on here in the future.

can someone upload this again please?