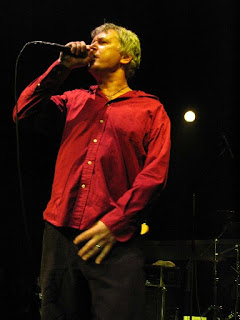 ...or some shit like that, at least that's what they tell me anyway. I have invested well over $1000, if not closer to two-grand in Bob's various enterprises. And what do I get in return? Not a single thank you, not even so much as goddamn handshake. I have gotten some pretty cool tunes out of the deal though, and continue to do so, just on a less frequent basis. In 2003 a list of about two-thousand proposed Guided By Voices song titles/one-off band names, authored by yours truly made it into Bob's scaly mitts, but has he availed himself to utilize so much as one? Hardly. Such proposed titles as "Third Spasm Nosebleed," "Canned Alaska," and "Drool Floodplain," ostensibly failed to make it past our man's stringent quality control. His loss if you ask me.


Long may Robert Pollard run, for even when he puts out shit, it's his shit and we all know it. Most of us could do far worse. Bob was supposedly quoted as saying, "I could write five songs on the can, and three of them would be good." These days, if it's one gem for every five clunkers so be it. Here's to a guy who can kick start his career into high-gear at 36 years of age. There's a few more hopeful years for me yet on that timetable, and it gives me quiet (and cold) comfort.
For this upload, I've got a GBV smorgasbord for you true believers out there. To Trigger a Synapse was procured song-by-song (all 43 of them) on classic-era Napster. Slapped together at various bit-rates by god knows who, it's merely a solid lineup of GBV demos, acoustic cuts, Peel session tracks, covers, and the occasional live offering. Some songs cut off, but no great loss to most of you, as a few of these have made it onto GBV box sets and whatnot. Dig in, and wish the Fading Captain a happy 50th. Hats off you fantastic bastard.

thank you, thank you. believe it er' not i'm a new comer with gbv and all the various incarnations. and so far i digs um' all. even the "circus devils". hats off for a great post!

Wow, I've been looking for The Goldheart Festering Moon Directory for years. Ever since I heard it on my very own copy of To Triggers a Synapse, now lost.

Lots of stuff on here I've never come across before - thanks...!

Could someone please repost the album? i had a problem with my ipod, will be eternally hateful/grateful

Hi - thanks so much for posting this! What a great collection. One question, I really wanted to get the Edgefest '96 tracks (last live performance featuring the 'classic' line-up) which are listed as being on this bootleg on the GBV database, however they are missing from this version. Do you happen to have those tracks? And if you do is there any way I might be able to grab them off you? No worries if I can't obviously, but I thought I would ask.

Also wanted to say - thanks for the other GBV albums you've posted here - they're great!!

All the best-
Dick Whyte

any chance to get this re-uploaded?

Please update the link. Thanks.😀