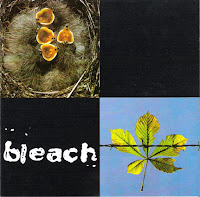 Yet another criminally overlooked and under-appreciated band that came courtesy of the early ‘90s British dreampop movement. In their brief lifespan they eked out about a half-dozen eps and sadly, only album, the superlative Killing Time. Never heard it? Got to half.com NOW, and buy a used copy if a new one isn’t available! It’s that crucial – right up there with Loveless, Raise and the rest of ‘em. Anyway, dealing with the matter at hand this seven track mini-album bares the first two fruits of their labor, the Snag and Eclipse eps, both long out of print.

Band mouthpiece, Salli Carson absorbed the spotlight on any given Bleach record, and this one’s no different. Snag’s “Dipping,” is quintessential slice of shoegazer rock, just as dense and enthralling as any of their contemporaries, Lush, Swervedriver and Chapterhouse included. Further into the ep is “Burn,” wherein Carson is scathingly lambasting something or somebody, but the intended target is beyond yours truly, and possibly ditto for you as well. Less vitriolic, but along the same lines, “Wipe It Away” from Eclipse is another of Carson’s cathartic, mostly-spoken monologues, this one indulging in a delivery, that believe it or not, borders on hip-hop.

There’s lots of dynamics here, and despite the underwritten and/or lengthy nature of some of the selections, this disk (if you can find it) and the aforementioned Killing Time, highlights the best of what Bleach had to offer, and for the most part, it was pretty flabbergasting.

Thanks! i bought a copy of 'killing time' at an unbelievably cheap price at amazon.
Anyway, are you familiar w/ a band called Band Of Slaves? I saw their video for the song 'eternity' back in the early 90's on mtv. i was blown away. awesome song/video. the singer sounds like a cross between ian macculoch & jim morisson. can't find anything about them in the net. please help.....

An absolutely brilliant band that did not catch on as they should have in the States. Thanks for the great memories!

I remember buying Snag and Eclipse on vinyl when they came out.I stupidly ended up selling them and I've just bought the Snag CD on ebay from someone in New York.
Thanks so much for posting the MP3s..I'm listening to them now. They are dreamier and less aggressive than I remember them being.
Two more things I recall about Bleach..I wrote a letter to them at their PO Box in Ipswich and they sent me a nice reply, and I also had a bootleg live video which I lent to someone who recorded Coronation St over it!
Anyway,thanks again!

Can you please repost Eclipse?? Thank You!!!!

Any chance you could repost this when you have time?

Hi. Can you re-up these EPs? Dying to find them. Thanks :)

Really hope you can re-up these!

Hello I was wondering if you are able to reupload this album I would greatly appreciate it thanks.