Swervedriver - "Laze It Up" - Raise-era b-sides and more 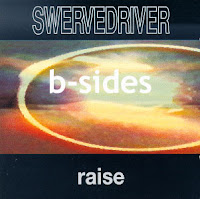 In a perfect world, airline food would be catered by Red Lobster, every city would have an Amoeba Records store, and Swervedriver would re-release their walloping debut album Raise, as a two-CD deluxe version containing that album’s staggering number of b-sides and rarities, most of which equaled the caliber of the songs that made their way on to the record proper. And oh yeah, world peace and an end to poverty would make it a better nice too.


The early ‘90s were an incredibly prolific era for Britain’s Swervedriver, who were often noted as the band that catapulted the “car song” into the the shoegazer era, via their signature indie hit, “Son of Mustang Ford.” Even before Raise saw it’s 1991 release, the three singles that preceded it – “Son of Mustang Ford, “Rave,” and “Sandblasted” were issued as four-song eps with each bearing three exclusive cuts. That’s NINE songs that comprised a hypothetical album in itself! But wait, there’s more! The Japanese import of Raise also contained a bonus track, “Andalucia,” though a bit lacking in the songwriting department, was still a treat. Some vinyl incarnations of Raise also came with a two-song flexi disc with two “twangy” instrumental tracks that would foreshadow what listeners could expect on Raise’s followup, Mezcal Head. The US Reel to Real ep, that served as an unofficial companion to the album, featured “Sandblasted” as the leadoff cut, with yep, you guessed it, yet another three smashing, non-lp gems.

See the notes below to learn about all of the songs that round out this compilation, as well as their sources. Some cuts here made their way to the 2 CD Swervedriver anthology Juggernaut Rides, but the majority didn’t.

As some of you have no doubt noticed the download links for this "compilation" have expired.  I'm electing not to renew said links given that much of the material here has been made available on the Juggernaut Rides anthology and the 2008 deluxe reissue of Raise.  You might still be able to find Laze it Up on file sharing platforms like Soulseek, but if possible do your part and support the band. Thanks.
Posted by spavid at 2:09 PM

Hey, just to point out, it was a vinyl 7" not a flexidisc with the Raise album

I stand corrected. Thanks!

Can't wait to hear these. Thanks!

Swervedriver is coming back for live shows in 2008!

Anyone have any Mezcal Head-era singles?

do you want the "never loose that feeling EP" (between raise and mezcal head)?

Thank you very, very much