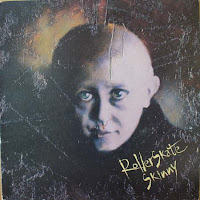 Dublin's Rollerskate Skinny surely rank as one of the most artistically unaffected bands of the 1990s (or for that matter any decade) to enjoy major label distribution and support. Yes, Jimi Shields, brother to My Bloody Valentine's Kevin Shields peeled off avant guitar salvos aplenty in the Rollerskate's, but it was lead vocalist Ken Griffin who was the true visionary. The quartet opted for a congested, surrealistic canvas as opposed to the shoegazer-ish trend du jour, that resulted in two brilliant cult-classic albums, Shoulder Voices in 1994, and the slightly more approachable Horsedrawn Wishes in '96, before calling it a day shortly thereafter. 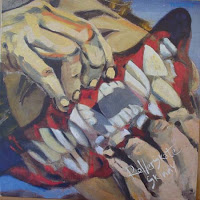 The band's aptly titled debut ep Novoice, saw it's vinyl-only issue on UK imprint Showbiz Records in 1992. It's two prolonged jams, "Complacency," and "Cushy Daughter" were rough noisenik sketches of what the Rollerskates would vastly perfect upon in just another years time.

Their second vinyl-exclusive offering, Trophy, brought to light the full extent of the band's prowess that would later pay off on their aforementioned albums. Amidst a startling sense of dynamics and oblique lyrics, later to be album cuts "Violence to Violence" and "Bow Hitch-hiker," benefited from Shield's unwieldy guitar theatrics that ricocheted and boomeranged throughout their collective twelve-minute time span. Sonically layered to the hilt, Rollerskate Skinny's sophisticated, indigenous wall of sound could beat Phil Spector at his own game any day.

I remember 'bow hitch-hiker' from john peel's show from around '93.

I recall thinking how great 'n' weird it sounded, what with the song title feeding the mind with various obscure images that made you chuckle for no apparent reason.

I'd like to hear that '94 LP at some time. I already have the CD of 'horsedrawn wishes'.
It's nice to finally get to hear that track again.

I've been looking for this in record shops around Dublin for years!

Hey, Novice works great but Trophy seems to have some issues when unpacking. Any thoughts? Possibly repost? Cheers.

Both eps were bundled together in the same download, and I was able to access both of them. Try downloading the file again, and let me know if you're still having trouble.

Hmm, Trophy worked just fine today. I reckon that's why you're the blogger and I'm the dopey consumer.

Hello, Any chance for a re-up, please? Saw these guys at Lollapalooza many years ago. Thanks!