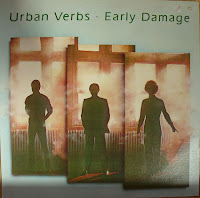 “No-wave,” “cold-wave,” an perhaps even “hard-wave,” but definitely not new-wave, Washington D.C.’s Urban Verbs were either defiantly flipping the bird to the man (in this case, Warner Brothers records) or simply progressing on their own weird trajectory, on Early Damage, their second and final LP. It’s hard to believe that any major label would mint an album this artistically disaffected. So much in fact, that some of the eerier selections here would make Ian Curtis sound downright friendly by comparison.

Robert Goldstein’s chimey, clangy fret-work is actually more tuneful than Roddy Frantz’s vocals, which he opts to speak more than sing, so I suppose that’s not saying much. Early Damage is where doomy post-punk flirted with the burgeoning goth scene of the early 1980s. It must have been one hell of an album for the WB to market, and maybe that explains why this slab of licorice pizza assumedly sank without a trace upon it’s ’81 issue. It’s not a big favorite of mine, though it’s more tolerable than I let on. I saw it somehow necessary to archive this record, if only as a curiosity. As for their much user-friendly self-titled debut, it’s been reissued on cd and can be purchased here.

Update: Early Damage has been rereleased on CD. Get it from Amazon or iTunes.
Posted by spavid at 5:43 PM

Thanks for this link. I have got their debut album and I like it very much, especially their first single "Subways" ;)

I've been hoping for a long time that someone would do the vinyl conversion for this one. Thanks so much!

I bought this on vinyl when it first came out and liked it a lot. I've been wanting to find an mp3 version for ages, so I could listen to it more conveniently. I have been able to listen to it on cassette in my van, but now can put it on my iPod, and listen to it anywhere. Thanks!

I just found this album for $1 at a record shop that specializes in jazz and treats rock as an afterthought. Best dollar I have spent all week. It's a lovely cross between Joy Division and early (pre-pop) Simple Minds. I bought it sound unheard, based on the strength of the cover art and the production credit to Steve Lillywhite (who also produced early Simple Minds, Big Country, and of course U2). The Warner Brothers logo was a red flag, but my concern was unfounded.

I love this album. I was so happy to find it on CD -- after years of looking. Now, will someone PLEASE issue Elton Motello's POP ART on CD?! (Also, The Jim Carroll Band's DRY DREAMS.)