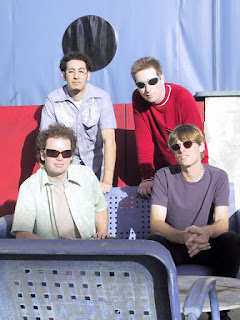 I'm not sure how long I'll be leaving this one up folks, so don't sleep.  It's not often I post anything thoroughly unreleased (and unsanctioned at that), but ever since sharing Summercamp's Tonight! ep, a scarce import disk that followed up their devastatingly great debut, 1997's Pure Juice, a bunch of you had inquired if a follow-up had been recorded.  I've know since about 2002 that Tim Cullen, Sean McCue and Co. had indeed tracked a subsequent album that never saw the light of day, but I had no further details to offer.  I'm not certain who the original source was, but low and behold someone came forward with files of said unreleased album a few years ago, and by the goodness of their heart I was a fortunate recipient.  Since then, the clamor and hunger for this long-shelved album never completely died down.

This really shouldn't come as a surprise given how addictive the infectious Pure Juice was.  Factoring in it's major label backing, Juice exuded obvious commercial "procurability," as it were, but amid it's radio-friendly bona fides was a restless surge of crunchy guitars and power pop viscosity that threatened to make a break for outright pop-punk.  The sessions for Summercamp's second (and apparently untitled) record followed a similar pattern without falling into any formulaic trappings.  Parallel to Pure Juice's faster songs ("Nowhere Near," "On Her Mind") this disc has no shortage of power-chord ridden barnburners - "Like a Wave," "Unscrew," and "Uncoordinated," that if anything up the tempo ante.  Even when exploring the other side of the coin, the more subdued "Perfect Little Thing" and "Escapism" while a lot less frenzied never breach sappy ballad territory.  With a generous fourteen tracks total there's plenty in-between to frolic in as well.  Cullen and McCue's quality control was pretty astonishing, and there's nary a bum track in this bunch.  Summercamp's contract with Maverick Records ostensibly had the option to turn down a second record.  Whether this was due to insufficient sales of Pure Juice, or perhaps s shakeup at their label (more likely it's parent company, Reprise) it isn't fully known why Summercamp's second album never got the green light - but neither of these reasons reside in the songs themselves.  And at long last you can hear them for yourself.

Incidentally, the band reunited for a 2015 show (or perhaps multiple ones) in their native Santa Barbara...and a new song was released, "Peach Tree" which you can find on Bandcamp.

wooooooooooah!!!! it exists. I've ALWAYS wanted to hear this. Summercamp crafted some of the catchiest power pop tunes of the late 90s. I cannot wait to listen to this! Thanks!!!

Thanks so much, their debut was soooo gooood!

Cullen or McCue - please tell me who wrote each of the 14 songs... Thanks, Luis

Glad you're enjoying this. Luis, I'm afraid I don't have any songwriting credits for this. My apologies.

This is pretty good! Thanks for sharing it!

I'm gonna have to write you into my will now for sharing this...can't download fast enough! Cheers!

This was great, thanks. Wondering if you'd be able to track down their 1993 album under the name Old Man... a bit of difficulty on Google with that one.

Just listened to this. How does something like this sit in the vaults?? Pretty rock solid!

Very excited to check this out. Thank you!

My god, I find this and now it's gone? Any chance of a re-upload?

Got it. Many thanks!