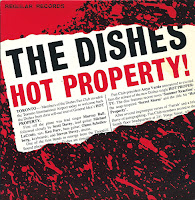 Toronto's Dishes were one of zillions of bands that came and went, largely before I really started paying attention to music.  Tis a damn shame, because had I been born, say fifteen years prior to their 1975 inception this vibrant six-piece would have been a blast to see live.  Too docile to be deemed punk, nor as synth-reliant as the emerging new wave scene, The Dishes functioned on their own artful plateau.  A full-time saxophonist in the guise of Ken Farr was one of the group's most distinguishing attributes, overshadowed only by frontman Murray Ball whose animated timbre is a vaguely acquired taste.  Comparisons you ask?  Trace elements perhaps of Roxy Music, Dead Fingers Talk, and even a dab of Bowie.  Hot Property! dishes out a trifecta of genuinely classy, deftly crafted tunes with enough personality and pizazz to ensure you lick this platter clean every time.  Another 7" preceded this one in 1977, and in 2001, the Kitschenette retrospective CD followed, which seems to be garnering more cash than the original 45s.  A full history of the band is presented on the The Dishes homepage.

A. Hot Property
B1. Summer Reaction
B2. Secret Storm