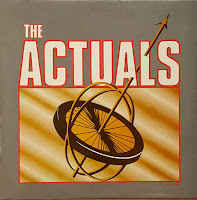 The Actuals were presumably the pride and joy of Bridgeport, CT (or thereabouts) in the early '80s and made this record to show for it.  On the surface, it appears this five-piece had affixed themselves to the coattails of Oingo Boingo and Fixx and were hanging on for dear life (albeit with a slightly less over-the-top penchant than Oingo, with nearly zero social conscience of the latter).  These guys operated on the more frivolous end of the new romantic spectrum, and as such should have gotten more mileage out of these half-dozen tunes, but back then commercial returns were usually minimal on privately pressed records.  In the grand scheme of things, The Actuals isn't a subpar disc at all, merely dated.  In doing my research for this I happened upon an a song predating this album, in fact their namesake tune which I've shared the video of below.  The YouTube link will take you to a short bio of the band.