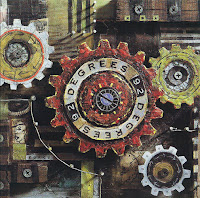 92 Degrees were an unheralded Chi-town trio of power pop lovin' youngins', who for their second album (this one) were taken under the wing of Shoes prime mover Jeff Murphy...to a sizably considerable extent.  The record in question was produced and engineered by Murphy at the Shoes-helmed Short Order Recorder studios in Zion, IL, and was released on that band's very own in-house label, Black Vinyl Records.  Now that's what I call cutting out the middleman.  Nonetheless, 92 Degrees hearkened not to Zion's finest sons, rather the likes of contemporaries Greenberry Woods and Matthew Sweet, not to mention (at least to varying extents) the jangle and harmony of forebearers the Hollies.  Beyond that, the band doesn't extrapolate or build upon the formula erected and fortified by the aforementioned, but they sustain it splendidly.  For some reason you won't find his name listed in the credits, but Material Issue's dearly departed Jim Ellison lends vocals to the mid-tempo "Have You Ever Had Love?"  92 Degrees reserve their most robust artillery of fireworks for the resplendent, tension-laden finale "She'll Never Know."

92 Degrees was preceded by a 1990 mini-album, Money Makes the World Go Round, which in fact was issued on Ellison's homegrown Big Block Records imprint.  You can check it out at Amazon Downlows.

thanks! for a while there in the mid-90s, Shoes' Black Vinyl imprint was putting out a bunch of cool music......

Thanks very much! a true undiscovered gem. And I agree, final cut "she'll never know" is a powerpop classic.

Peace/Love Y'all. Those were some good times right there! Steve S.

Any chance of a re-up ? Would love to hear this one.