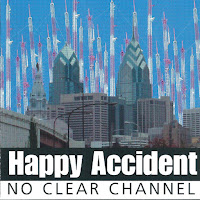 Despite a 2002 copyright there's barely a stitch in the digital sphere regarding Happy Accident, a Philly trio with a doggedly cheeky disposition who happened to sport a guitar-pop acumen embracing everything from folk to punk.  Plaintive lyrics and varying gradations of harmonies abound on No Clear Channel, with the band making their most effective case on the rugged "The Frisco Mixer" and the pure power pop of "Pretty Assholes."  Elsewhere, "Call in Sick" elicits such choice observations as, ...the kind of sick that makes you feel good enough to see a museum, and not feel too guilty.

An added treat is a cover of "The Earthquake Song" an obscuro chestnut by a bygone, early '80s wave outfit from the L.A. area, Little Girls, who coincidentally I was tipped off too quite recently...and might be sharing some of their own handiwork in the not-too-distant future.  For now, let me know if Happy Accident does anything for you.  One last note.  The band's label 10 GeV has a functioning website, but it won't take you far beyond a handful of streaming audio clips.