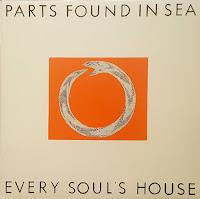 Had a friend once who insisted the most ideal way to acquaint oneself with any/all bands is to a) see them in a live setting or b) via a live album.  There are more pros than cons to this theory, because after all, if a band can't pull it together on stage...  When I took a chance on this used Parts Found in Sea LP awhile back I bought it out of curiosity above all else, and wasn't the slightest bit aware I was buying a live disc.  Every Soul's House, predominantly recorded in the band's native Toronto is a crisp, well-recorded club document benefiting from Part's competent musicianship and general enthusiasm.  My complaint is that even after a few spins I still don't have a precise handle on what their modus operandi was, or perhaps more to the point if they had one in place at all.

It's evident PFiS were club rats but bore virtually none of your typical "bar band" trappings, instead opting for more refined pop, with varying collegiate angles.  Rarely anything daring or strident surfaces here, but despite Every Soul's... anticlimactic tenor but that doesn't meant there isn't wheat to be separated from the often ample chaff.  "No Country," suggesting post-punk inclinations a la solo Tom Verlaine and to a lesser extent the Jazz Butcher is actually quite excellent.  Side two's penultimate "The Forest" is gloriously frenetic and amped-out as well, making so many of this album's comparatively non-descript ventures all the more puzzling.  And we get something of an anomaly via the bluesy "I"ll Go Crazy," which actually turns out to be a James Brown tune.  At the end of the day I see what Parts were capable of on stage, but I think I'm going to need to track down some of their preceding studio records to discern what they were really striving for.