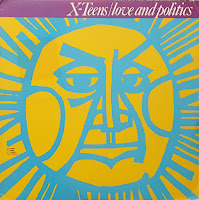 This isn't my first entry on the X-Teens, but it's likely to be the last, as I've exhausted the rest of their catalog previously.  As I've let on before, the X-Teens were a co-ed allotment from NC (Durham specifically) who fit in keenly with their respective era, without indulging too much in the gaudier affectations of it.  The Don Dixon-produced Love and Politics, while not wall-to-wall magic, is still the strongest thing they ever committed to tape, highlighting their penchant for plush, forward thinking power pop.  There are some near-perfect, ETC-endebted forays on Love... like side-A's robust trifecta of "Say it Isn't So," "Change Gotta Come," and "D.I.F.Y.," all thanks to guitarist Robert Bittle whose vocals are an uncanny dead ringer for Andy Partridge.  Kitty Moses gets her turn on the mic, delivering the stunning "All Day Long," and "Western Eyes," the latter a silky smooth ballad.  A really accomplished set of material, and it's unfortunate nothing by the X-Teens ever officially segued to the digital era.