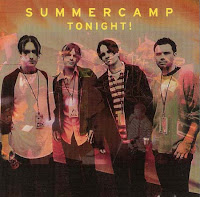 Up until very recently (at least from my vantage point) the going rate for every major-label success, is about ten or so flops. From the '60s to the early '00s, the big five (or is it four?) deliberately and predictably threw their weight behind a proverbial "golden goose," according them with the lions share of the promotional budget, leaving dozens of other signees to languish with nary a thought of recouping their investment. Absurd by any measuring stick if you ask me, but due in part to file sharing, the big boys have wised up, carefully selecting their rosters and making a more substantial priority of their signees. The beauty of the old-school model was that so many of the spill-over bands that were given short shrift by the public and the industry, would occasionally be of artistic, indie-label caliber, adopting small but devoted audiences in the process.

Santa Barbara's Summercamp just so happened to be one of those "major label miracles." Scooped up during the '90s alt-rock feeding frenzy the band signed to Maverick, the Madonna curated division of Warner Brothers. The wrong place at the right time, or the right place at the wrong time? Maybe a little bit of each. Summercamp's hyper-melodic power-pop probably came across as rather ordinary to young adults and older. Some of the most potent material on their solitary LP, Pure Juice, flirted at the edges of pop-punk, but the Warped Tour set wasn't convinced. Initially, it appeared that Summercamp had their foot in the door, boasting some regular airtime for their "Drawer" video on MpTytV, but hopes of making a more noticeable dent were soon dashed. A follow-up was recorded, and in classic music industry fashion, it was shelved. Singer Tim Cullen went onto an indie solo career, which resulted in an album, Fun Razor, that didn't stray far from where Summercamp left off.

The Tonight! ep was released shortly after Pure Juice as a Japanese import, with very limited copies swimming their way over to the mainland. It's no substitute for the aforementioned main course, but a nice little appendix, with three live selections and some studio outtakes. The title cut, by the way, is a mere four seconds. Huh.

Nice post. Do you know if their unreleased second album ever leaked out? Thanks for this.

Not as far as I know. Potentially, songs from that unreleased album may have made it onto Tim's solo record.

The other creative half of Summercamp, Sean McCue, has also released a solo album. Called apart, it is as much a departure from the pop/punk stylings of Pure Juice as Tim Cullen’s Fun Razor is an homage.

I just found out a video was shot for "The One I'm Without." <a href="http://fullscopemedia.net/index.php?page=work&id=34&lid=16>Video<a href> Wow. The plug was pulled on this album way further along in the process than I thought. Amazing.

Hey, nice article! I have a couple questions... could you tell me the track lengths and who wrote the unfamiliar tunes ("High Horse", etc. - I'm guessing Sean or Tim...)? Also, do you know the proposed name for the unreleased second album? One more: how the heck did you get a copy of this EP?!!

It's depressing how good this album is. Surely, after all this time, the guys should be able to get the rights back, so they can release it themselves. Sean has the Old Man album for sale on his site. It's time for The Invisible Album to see the light of day.

For what it's worth, the 1998 Menthol and Orbit albums are in the same sort of limbo. I'm not sure what the labels stand to gain at this point keeping them under lockdown, but I've pretty much given up hope of them coming out.

@ Greg, please tell me where and when you were able to legally download "Happy", I've been looking for this song for years now!
I've been checking Sean and Tim sites but could not find anything :(

Does anyone have the songs Greg mentioned
1. The One I'm Without
2. Like A Wave
6. Open Up
8. Happy
10. Uncoordinated
11. Perfect Little Thing
13. Far Away Look

I should add, "Like A Wave" was e-mailed to me by the person above who removed his post and gave us quite a bit of information on the album. And, as I mentioned above, Tim posted "Face" on his Bandcamp page.

@Greg are you able to upload any of those songs? I'm really looking for "Happy"!

I just fixed the link.

I found an old post about their second album. It mentions it coming out late 2001/early 2002. It also mentions the new drummer, Ramy Antoun. Like A Wave and Face are easily available online but I've had no luck with any other ones. Maybe this will get this post up and running again. I have no idea how accurate this link is but considering there's not much out there for the second album, I figure it's worth a look.

DUUUUDE! I've been a Summercamp fan since like '03, even bought Pure Juice even though I'm from Perú lmfao and I JUST find out that "Tonight!" exists!! I've actually found it and I'm gonna buy it and upload it for all you broskis in Mp3 320 kbps quality!! THANKS FOR INFORMING THIS EXISTS!! WOOHOOO!!! :D

Well, it's 2019, and there is still new word on the second album. The band is active on YouTube and has uploaded several concert clips, but they do not interact with comments which is frustrating. I have a feeling it's Sean. He doesn't respond to Summercamp questions at all, even when you use the information on his site to contact him. I have a feeling that the reunion in 2015 and the new track was them testing the waters, and they didn't get the response they felt they needed to pursue any more band activity. All speculation. I wonder what would happen if I uploaded the 8 tracks I tracked down that were supposed to be on the album. I just don't want to risk a strike against my account since the band is active on YouTube.

I've got the second album. Sean sent me a zip file with the 14 tracks in .M4A format. It's really quite wonderful.

So does that mean it was finished and mastered by their old label? Or were the mixes released/given to Sean since the label never did anything with them. I wonder if it will ever see the light of day. I'd literally throw money at anything this band released - shirts, music, whatever.

I have the album I'm sorry for not uploading it, life got hectic lol. I have some free time now whoever wants it just leave their email or something and I will send them a link to a Google Drive with the songs on it. Thank you everyone.

This would make my year, no contest. My email is eldtaldeer at gmail dot com if you find any time in the future. I just listened the first album and the Tonight EP yesterday. What perfect timing!

If, for whatever reason, that doesnt work, I can provide another email.

Hey RedShyGuy I think you can't post your email here or something, but no worries guys I'll post a mega or mediafire link with the rar/zip on it. Just let me find it lol I'm reorganizing my room this week I'll get it then and upload everything by Sunday tops. Thank you for the wait.

It's already online in case anyone else needs it.

Hey Todd can u send me a link at mauricioesma(at)gmail?? I could never find my friggin Tonight! cd I hope it didn't get lost while I moved houses lmao. If I find it somehow I'll upload it in FLAC for preservation but somehow that seems less unlikely by the day...

GUYS I GOT IT! Better late than never :D hahaha big thanks to Michelle for providing me this!