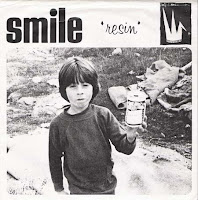 Grunge. It's not just from Seattle anymore, or more precisely was. Tustin, California's Smile had a lengthy but less than prolific run, yielding two LPs, Maquee (1994) and Girl Crushes Boy (1998). Maquee (pronounced 'muh-key') was initially released on Cargo/Headhunter Records, but was reissued a year later on Atlantic Records, strictly on the recommendation of a college intern, so the rumor goes. That album's bottom-end tendencies actually paled compared to the short stack of wax Smile released beforehand. Neither icons nor iconoclasts of the short-lived grunge movement, this power-trio led by the surprisingly diminutive Michael Rosas, offered perhaps their most ferociously bludgeoning song ever, "I Don't Want to (Leave You)," on what appears to be a self-released single. That cut along with the accompanying "Leuaine," in all their bass-heavy glory, could have gone head-to-head with anything on Nirvana's Bleach. Trust me, that's saying a lot. 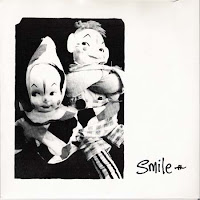 The other single in question was just as much fun. The A-side, "Amanita" fell in line, so to speak, with the lock-step grooves that Helmet were renown for in their early-'90s prime. Six and a half minutes of taught, scalding riffola that would have surely sent any household pet within earshot straight under the couch faster than any vacuum cleaner. The less intense flipside, "Staring at the Sun," is underwritten, but still a keeper. It would find it's way onto Maquee in an overhauled version.


After the commercial disappointment of Maquee, Smile reverted back to Headhunter to eventually release Girl Crushes Boy in 1998, an endearing pop-inflected album, steeped in Rosa's idiosyncratic muse. It's very much worth seeking out.


PS: Michael Rosas can now be found in this band.

ahh we did a benefit show for petra haden and SMILE was supposed to headline along with the killingtons (this was in Anaheim)and smile never told us they couldn't play, we HEARD about it 2nd hand...so we got Rilo Kiley to play (back when OC folks were clueless about them). RK filled in and blew up...while smile never played another show (i think)...viola!

i would love to have the rest of this bands work, its extremely hard to find on the interweb.

Thanks for posting these!

THANK YOU SO MUCH. I love Smile and these were really tough to find. Bravo! I owe you BIG!

Thanks for this,been looking forever for the first single since I heard it years ago on john peel's show

\i heard this on peel too and bought the 7"...it had a different cover to the pic in this post tho. a young girls face in b/w. lost it ages ago hah

*I mean a drawing just of a girls head. not that kid holding the can thing up

one of my favorite bands of the 90's
does anyone know where to find the "sleepover" ep and "girl crushes boy" lp on Headhunter?
can't find this anywhere in any blog...

I have the sleepover ep. I believe it was promo only and back in the mid 90s I worked music retail. Good stuff.

can you, please, repost these Smile's early singles?