As a prelude, I know it’s a hard sell to encourage anybody to investigate music they are entirely unfamiliar with, even if it’s offered *ahem* for “free,” but to anyone who has checked out my previous posts, even so much as one album or single, trust me when I say that Glide are an absolute must listen. I’d probably start with Disappear Here, and go from there but read on… (Please note this is not the same Glide associated with Will Seargent's UK group of the same name).

Complete unknowns in North America, and virtual unknowns in their native Australia, Sydney's Glide dispensed bittersweet ruminations of love and angst in the form of incredibly melodic and thoughtful guitar-rock songs that have yet to be replicated since their all-too-brief ‘90s tenure. The untimely 1999 death of charismatic front-man William Arthur short-circuited Glide’s career, but not without leaving behind an impressive body of work that has ostensibly languished out-of-print for close to a decade now.

Glide took their cues from ‘80s American indie-rock, and less obviously availed themselves to a handful suave Brit-pop maneuvers. Despite these touchstones, this phenomenal Aussie quartet yielded something that was unmistakably of their own creation. There’s a certain depth and heaviness to their songs that shine through consistently, but even their most gripping moments never succumb to maudlin or melodramatic trappings. With Arthur’s lyrical acumen and his band’s impressive sonic salvos, Glide melded it all together with a sophistication that defined their sound, and ultimately, their legacy. This band’s catalog is nothing short of astounding. 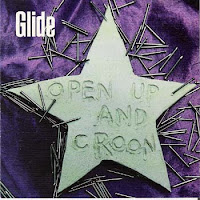 Open Up and Croon, Glide’s debut full length is the raw, toughened yin to Disappear Here’s bittersweet, reflective yang. Texturally the albums are different, but not entirely disparate. The formers lead-off title cut is a bitter piss-take, aimed squarely at the protagonists romantic rival. The song is somewhat unrepresentative of the remainder of the album, but ultimately Croon gradually segues into mellower, but no less angst-ridden motifs. 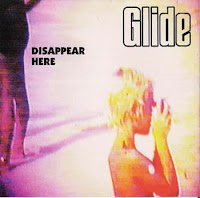 I feel guilty for suggesting that as good as Glide’s debut was, Arthur didn’t really hit his stride until the following Disappear Here, but there is some truth to that notion. The intensity and fervor is still present as it ever was, however when Glide ease the reigns ever so slightly (i.e. pile on some choice ballads) the end result is that much more rewarding. The melancholic, yet totally appreciable “What Do I Know?,” “Hole in the Middle,” and “Tangled,” bare a minimum of two colossal hooks, just one of which would prop up some other sorry suckers entire album. 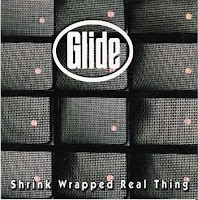 Shinkwrapped Real Thing gathers up a myriad of early ep tracks, with much of the material on par with Glide’s proper albums. A posthumous Glide album of new, unreleased songs, Last, was released in 2000 in conjunction with the band’s official website. A full discography and catalog of “available” Glide CDs are provided, but the site has seen no updates since it’s inception seven years ago, I wouldn’t hold your breath when whipping out your Mastercard. Glide’s Myspace page has a bevy of useful info, and the usual obligatory songs. If anyone is interested, I have a superb compilation of Glide b-sides and radio sessions I can upload.

Open Up and Croon (1995, Hypnotized Records)

I've decided it wouldn't be too smart to host these disks anymore, now that they've been made available on iTunes.  From what I understand some physical copies might be available through Glide's website.  Go here for all the pertinent details and links.  If you're encountering Glide for the first time, check out the handful of tunes they have streaming on their page, or go with the 30 second clips on iTunes linked above!

A million thanks for what turns out to be a great Xmas present from Willfully Obscure!
I have been looking for these GLIDE CDs for years and here they are... on the best music blog.
If you could post the 'Last' CD and the b-sides and radio sessions, I would be infinitely grateful to you.
I wish you a happy new year.

I go back and forth on which of their albums I prefer more although I think I'd have to give the slight nod to "Open Up & Croon" only because it was the first heard of the two upon initial discovery of the group in 1996 or so. Great, great records that still get played often in my household.

yes! it's time for a Glide revival a la Nick Drake! A truly astonishly great band with one of the greatest songwriters ever(rip, william arthur). Thanks so much for spreading the word! I have had recent contact with Joe Ryall, the bands former manager, and I'm pretty sure that all of those releases are still available from the website. I believe that I have all of the just as great b-sides but would love to hear any radiosessions that you have :) Now let's get one of these songs in a volkswagon commercial!

Thanks for the albums. Glide's "Thin Faced Man" was recently in Webcuts' Secret History of Australian Music series (which also features an MP3 of that track). Would also love for Lost and Shrink Wrapped Real Thing to be posted.

would love to have radio sessions posted, i played in the band and don't have these. I have a casette of the demos recorded live of Open Up, it is far superior to the final album. If only I could find that casette!!!

You are a god, sir. I've had Disappear Here for a while, but despaired at ever finding the other Glide disks. I also snagged your B-sides comp. If you post Last, I and everyone else will be eternally grateful.

Second, third, and fourth everything said. Glide were a fantastic band, if anything too good to be appreciated.

You can watch the entire Sydney reunion show here:
http://www.moshcam.com/glide/the-annandale-hotel-810.aspx

Thanks MoshCam. Great video. Couldn't think of anyone better to fill in Williams shoes.

Personally I can't buy mp3s from Itunes because of their regional limitations. As to physical copies, shipping would cost a fortune. So I downloaded these albums from you about a week ago, just didn't thank you then. So... THANK YOU very much!!!

Hello again. I just googled a Glide track looking for lyrics, and was unsurprised to again find myself on your fine blog! I had just a tape of a Triple J live session to keep me going Glidewise for years, then I had a bit of a rollercoaster moment. I discovered a newish online friend was actually bass player for several albums: Andy Kelly (@presentationN on Twitter). And that was when I found out William Arthur was dead. Quite a shock.