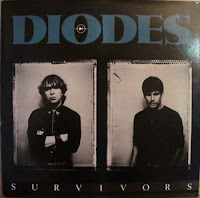 I never really was what you might call a "drooling fanboy" over Toronto's Diodes. For one thing, I wasn't aware of their existence until way after the fact. Secondly, aside from their rollicking, quintessential punk/power-pop signature tune, "Tired of Waking Up Tired," I never found anything in their catalog that was quite on par with it. I do however own the so-called Best of the Diodes reissue that came out in the late '90s, which featured their first two albums - 1977's The Diodes, and the followup, Released. A decent listen in moderate doses mind you, but despite the Diodes copious Ramones fixation, they were a bit too pedestrian for their own good.


Nevertheless, I know that some of you that peruse these pages would be interested in some hard-to-find Diodes material, so I offer to you fittingly enough, Survivors, a 1982 collection of outtakes on the Canadian Fringe Records label. Among some spicy originals like "Burn Down Your Daddy's House, and the title track, the Diodes take on the Stones, The Animals, and Shocking Blue, the latter beating Bananarama and Nirvana to the punch by several years.

Hey. Just a note that the Action Reaction (the Diodes 3rd lp) reissue will be out next year, alongside a live in 78 vinyl lp on Rave Up Records (italy).

The Diodes are on MySpace at:

Appreciate the info. Thanks!

that age was a very competitive era of the music, bands like The Ramones, Buy Viagra, Nirvana and others fight to get a place in history of the music.

any chance of re - upping Survivor?

I'm surprised you never quite 'got' the first album, "The Diodes" - which I consider still a bonafide classic from '77 - despite its Ramones fixation.

I found a copy at the Harvard Coop in Boston around the time it came out and I never tire of it to this day. Keep in mind, even at the time of its release(and recording), "The Diodes" only matches up in terms of influence, to the first Ramones album.

I may be wrong(Ralph Alfonso will know), but I think the Diodes' first album was recorded at the same time as "Leave Home" was - so despite a Ramones-y inspiration, when it was released....HOLY COW! Any album that could pull off 'that sound' was most welcome.

Still, the band never quite topped it, sadly...but I still have a warm spot for many spots on each of their subsequent releases. Thanks for keeping their flame alive here...