So, why haven't I dedicated more space to The Freshies before?  Well, I don't have most of their recordings, and what little I have has been made available again.  In fact the closest I've come to doing a Freshies piece is for frontman Chris Sievey's 1986 solo venture, Big Record.  If you're looking for a quick but fairly thorough bio on the band, Pop Geek Heaven isn't a bad pit-stop, but please indulge me with a few morsels of personal insight.

Based in Manchester, UK, the Freshies incorporated in 1978, just as the first blush of punk was mutating into some, er...different.  Presumably inspired by the Undertones and Buzzcocks, the band's spunky take on power pop leads me to think they may have had a preference for Stateside acts like Cheap Trick and perhaps even Shoes as well.  Their music was genius all the way around, with Sievey guiding his quartet as a capable singer and lyricist, penning cheeky tunes about romance and day-to-day dilemmas. Their initial spate of singles were released on their own label, Razz, but the quartet didn't get their first real break until MCA Records took a chance on them in 1980, scooping up their single, "I'm In Love With The Girl On The Manchester Virgin Megastore Checkout Desk."  It became the Freshies signature piece, and sold well.  More singles on MCA followed, with such distinct and verbose titles as "I Can't Get "Bouncing Babies" by the Teardrop Explodes" and "If You Really Love Me, Buy Me a Shirt."

The dirty little secret about the band is that they never released a proper full length.  However there were a series of DIY cassette albums, including The Freshies Sing The Girls From Banana Island... and All Sleep's Secrets.  The problem with the aforementioned tapes, while they may have been LP length, these were mercurial concept pieces, and even if they had been accorded the vinyl treatment they might have proved too challenging for more pedestrian ears to grasp, unlike their instantly gratifying singles.

There was one cassette that proved to be an anomaly, and that was 1980's Rough 'n' Ready.  While perhaps not a thoroughly consistent masterstroke, Rough... is by and large excellent, and it's the closest Sievey and Co. came to recording a no b/s full length in the conventional pop/rock realm.  As with all of their tapes, Rough was an exceedingly limited item, and as you might guess, fairly lo-fi.  In fact, all twelve tunes were knocked out on 8-track in under 24 hours.  Some of the songs like "Washed Up" and "My Tapes Gone" made the migration to singles, but most are exclusive to the release in question.  Punky, buzzsaw salvos like "No Money," "Yellow Spot" and "House Beautiful" speak to the Freshies, intoxicating blend of power chords and hooks while playing to the band's warm, reverb-laden strengths.  In fact, it could be the finest moment the group ever had, and this tape, alongside the band's flawed but worthy the very very best of CD comp, might be all anyone needs. 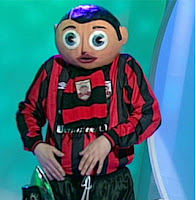 By the mid-80s, Chris Sievey had largely displaced the Freshies and music in general for a phenomenology more renown second act, as outlandish comic personality Frank Sidebottom.  His character was synonymous with the large and cartoonish papier-mâché head he would invariably don.  In 2014 a movie was made about his life.  Sievey died prematurely in 2010 from cancer at the age of 54.  From what I read at the time he passed away virtually penniless, and was given some type of charity funeral, as the British are kind enough to provide in situations such as this.

Sadly, I don't own an original copy of Rough 'n' Ready, and the best version I could procure was ripped at 160 kbps.  Everything sound's as clear as bell yet lovingly raw and lived-in.  I've included an additional folder of four of my favorite Freshies single sides.  Enjoy.

Freshies - WOW - one of the best powerpop bands ever! I guess Buzzcocks would have to be #1, but it's close.

i get 403 forbidden error

I would to hear these, please could you update the link it doesn't seem to working :(