Happy Chanukah and welcome to night one.  I have a habit of kicking things off with a bang, but this one may not be as much a revelation as from years prior.  Why?  As far as box sets go this one is relatively common for starters (albeit completely out of print, even in the realm of digital vendors).  Secondly, to our ears, this album contains a bevy of relatively household names (key word being relatively). 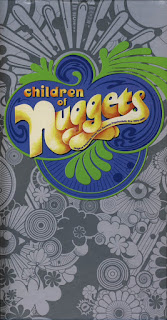 Nonetheless, I've said to myself and among friends on numerous occasions that Children of Nuggets is likely the gold standard for various artist compilation box sets.  It's consistency is nothing short of staggering, and it's scope encompassing, even though it technically purports to being genre specific(ish).  The back story on Nuggets originates to 1972, when rock scribe Lenny Kaye was commissioned to compile a double albums worth of songs from the first era of rock, representing overlooked artists just shy of surfacing on the mainstream radar.  That meant no one on the level of the Stones, Floyd, or even Jefferson Airplane were eligible.  Instead, Kaye honed in on the grittier side of psychedelia, angling for groups with a rougher, garage rock bent like the Electric Prunes, the Seeds, and The 13th Floor Elevators.  Mystique was a watchword, and when the record fell into the proper hands upon its release, it's slowly snowballing popularity never quite exceeded that of a cult classic, but it became a totemic one at that.  So much so, the original 27 track Nuggets double LP comp was quadrupled to a four disc box in 1998, featuring scores of other relevant artists circa 1965-68.  And in the intervening years before the box, dozens of other like-minded obscuro psych/garage compilations (the Pebbles series comes to mind) scratched the itch Lenny Kaye initially tickled.  2001 gave rise to a sequel Nuggets box, another four disc counterpart from roughly the same era, only with an emphasis on British and international acts. 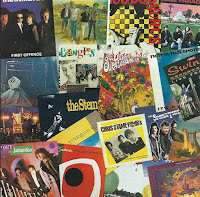 By the late '60s, psychedelic rock, as the world had come to be acquainted with it had become less prominent, but it's vestiges never completely burned out.  In fact, it's embers continued to ignite, albeit in a more sub rosa fashion than ever.  Enter Children of Nuggets, the third in Rhino Records box set series, and more comprehensive than the previous two in more ways than one.  Not so much in the way of quantity (still a manageable four CDs), but in the case of Children... a far greater swath of time is covered - 1976-96 to be exact, though bands from the '80s are the vast majority are who are covered here.  For the most part, the roughly eighty bands that comprise this collection are not out-and-out revivalists of the psych/garage form, rather artists that purloined a trick or two from their Baby Boomer elders.  Turns out the punk/post-punk movements in the late '70s that had displaced the beatnik underground hadn't entirely eschewed some of the previous generation's trippier inclinations, rather massaged them into something new. 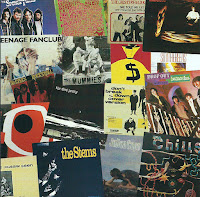 With a pool of twenty years of music to draw from, as opposed to the original Nuggets mere four Children of Nuggets producers Alec Palao and Gary Stewart were forced to broaden the boundaries, and perhaps even definitions of what psych/garage constituted in the post punk era.  Truth be told there's no shortage of participants who subscribe to the more traditionalist underpinnings of the genres in question - Lyres, Cynics, Fleshtones, Tell-Tale Hearts, Swingin' Neckbreakers and one-song-wonders The Nashville Ramblers whose magnificent "The Trains" is authentically laced with the sonic panache of the old guard.  As to be expected, all the major constituents of L.A.'s coveted Paisley Underground make a showing here - The Bangles (and precursors The Bangs), Three O' Clock, Dream Syndicate, Rain Parade, Green on Red and runner-ups The Point and The Jigsaw Seen.

Combos such as The Last, Barracudas, The Optic Nerve, Milkshakes, Hoodoo Gurus, XTC's alter ego project the Dukes of Stratosphere and even the rootsy Long Ryders all in earn their rightful place in Children's sprawling orphanage, given their almost obvious psych delineations.  But going back to what I said about expanding definitions.  On one level it's a little difficult to wrap your head around the inclusion of seemingly straitlaced power pop troupes like the Smithereens, Spongetones, Plimsouls, Posies and even early Chris Stamey & the dB's being accorded seats at this table.  Then again, a good number of that lot owed more than a wink and a nod to the Byrds, eh?  This box set's tentacles cull even further than that, bringing aboard Oceania leading lights The Lime Spiders (yep, "Slave Girl" is present) The Stems, Died Pretty, The Church and Chills.  We even dip over to the other side of the pond for C86-era gems from Primal Scream, The Dentists, Bevis Frond, and the farfisa-addled  Inspiral Carpets.

And of course, what would Children of Nuggets be without a couple of choice numbers from godfathers like The Flamin' Groovies, not to mention art punk prodigies the Soft Boys?  The segues from song-to-song can get a tad awkward given this collection's sheer diversity and scope, but it's consistency across all four discs is near-breathtaking - and best of all, near-perfect.  So much gold to be had here, but don't take my word for it.  Click on the pic of the underside of the box directly to your left for the entire tracklist with download links to follow.  Sorry no FLAC.

Great song on here by The Nashville Ramblers. I see you had previously posted Carl Rusk's solo album "Blue Period" but the link doesn't work anymore. Any way you could repost that album? Thanks!

Many thanks! Great blog! You have me trained to visit every Monday! - Stinky

One of my favorite box sets. And Rik is right the "Nashville Ramblers" song is fan-freaking-tastic. Highly recommended (song and box).

I'll get that up again soon Rik. Keep checking back.

Thanks for the kind words. Am in total agreement!

A classic set indeed -- bought it when it first came out. "The Trains" was worth the price of the box.

Right out of the gate: POW! A huge hole in my collection I didn't even realize I needed to fill. Thanks so much. Looking forward to what comes next...

So Good. Thanks. Classic.

I'll confess that I already had this box set, but I haven't listened to it in 5 or more years, but have been listening to it over the past two days in response to your post. Wow, that Creeps song is a classic; where the hell did those guys go?

Hi. Disc 2 and disc 4 are no longer valid links. Please repost those two. Thank you.