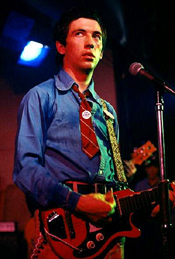 News none of us were quite expecting went out late last week announcing Pete Shelley, frontman for the Buzzcocks (and a solo artist in how own right circa the mid-80s) had died suddenly of a heart attack at 63.  The Buzzcocks initial 1977-81 lifespan was superseded many, many times over since the band reconvened in 1989, and it seemed like they might have well gone on for another ten years or so. Whether they were the founders of "pop-punk," as it were, or not, they certainly had the biggest hand in stirring that much coveted and ultimately lucrative kettle.  Arguably more influential than even the Sex Pistols, certainly hundreds of punters that followed in the Buzzcocks wake professed to be inspired by them, but how many genuinely sounded like Pete Shelley, Steve Diggle and Co.?  Heck, I couldn't even name a Buzzcocks imitator if you put a gun to my head.  Shelley had a singular voice, and a plaintive yet distinctive songwriting acumen to match.  Utterly irreplaceable.  Luckily, they toured so extensively most fans were at least able to catch a concert or two.  Can't really say that about the Pistols, or even the Clash for that matter. 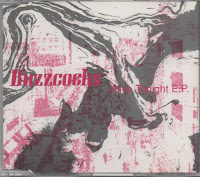 I've dedicated space to multiple live Buzzcocks collections, and even a batch of demos circa 1991, so instead of rehashing too much, I've got a mini-bundle of predominantly off the beaten path goodies, including radio sessions from 2003 and 2006, contemporary to the Buzzcocks and Flat-Pack Philosophy albums.  The emphasis on both of them was then-new material, but you'll find one vintage chestnut in each folder.  Then there's 1991's somewhat under-released, but relatively findable Alive Tonight ep with the reunited band not treading familiar territory, rather delving into promising new sonic tiers without compromising what made them quintessentially Buzzcocks,  And I suppose I couldn't get away without offering something in the live realm, specifically their 1978 Lyceum performance in London, as included in the now out-of-print Product box set.  It's only eight songs, meaning the band had an exceedingly brief set that night, or EMI records was being stingy with said retrospective.  And there's a couple of even more random one-offs including an unspeakably rare live tack of "Paradise," and a 1990 performance of a dandy tune titled "Wallpaper World," which evidently never found it's way into the studio.

Ya done good Mr. Shelley.  The gratitude is endless from my little corner of the world, and I'm sure many others.

Thank you - saw them at the Stone Pony in 1993, Steve Garvey was at the show and came onstage to play "Fast Cars" - best show ever

If you want to hear a (pretty good) Buzzcocks imitation, listen to the first releases of the Soup Dragons.

The link is broken!