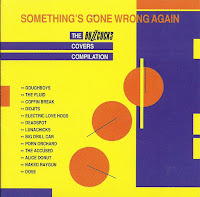 Thought this would tie in well with recent events, not to mention what I posted a couple nights back.  This was an easy sell for me back in '92.  First and foremost because it was a Buzzcocks tribute, but almost as appealing was the inclusion of no less than five of my top-tier faves, Big Drill Car, The Doughboys, The Fluid, Didjits and Naked Raygun.  Back then I would've purchased a compilation if it featured any one of them, even if this had been a Patsy Cline tribute.  Overall, Something's Gone Wrong Again is a par for the course covers comp with a few really ill advised choices balancing out the smarter ones.  Of the aforementioned participants, the Doughboys and Didjits take the cake, especially the latter, whose spin on "Sitting Round at Home" smoked the Gorilla Biscuits' rendition from just a few years before.  Electric Love Hogs convey "Boredom" with a Melvins-y thrust, Alice Donut taking on "E.S.P." is a logical pairing, and Raygun do more than adequate justice to the Buzzcocks anthem that never quite became one, "Running Free."  The Accüsed and Deadspot butcher their allotted slots disgracefully, and the Larry King soundbites on Porn Orchard's reading of "Why Can't I Touch It?" are nothing short of pathetic.  Some other good candidates for this album might have been Superchunk, The Figgs, and perhaps even pre-stardom Green Day...but of course, I had no say in such matters.  Fourteen tracks.  Hope your favorite is here.

Thank you for posting, been after this one since it was released