Every year or so I happen upon a phenomenal yesteryear release that I wasn't on my radar up until that point.  Sometimes I'm a couple years late to the party, others I'm behind the curve by a good three decades, and that was the case with the item I'm debuting tonight. 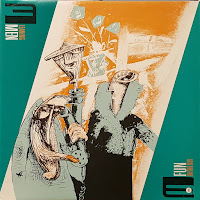 Just when I think I've plundered and unearthed every last lost '80s treasure from the Kiwi-laden isles of New Zealand a new fuzzy-skinned but succulent fruit appears in my metaphorical basket.  Three Leaning Men (actually a quartet based on the rear album sleeve roster) were not from of their country's epicenters like Wellington, Auckland, Christchurch or even Dunedin, but rather from the smaller city of Palmerston North, located on NZ's North Island.  As you might guess, 3LM were not the least bit impervious to some of the local contingents that surrounded them like The Chills (whom according to Wiki they supported) and The Bats, but they also had their sights set on that more sizable chunk of land due northwest.  These chaps would have slotted in perfectly with the likes of the Go Betweens and Triffids, and on the more Anglo side of things Orange Juice and Close Lobsters.  Yes, I know, it all sounds to good to be true, but lay your ears on "By Your Leave," "Facing" and "Who Knows" (the last of which sounds as if these guys were plugged into the Chills Wurlitzer) and you can confirm what I'm suggesting entirely.  Hard to believe something of this caliber has eluded us for so long, but I'm all for pleasant surprises.  A major find to say the least.

Fun in the Key of E, the band's lone full length, harbors a few misfires (most accumulating on side two) but the highlights are dazzlingly high indeed.  Including the ten brief songs on the album proper, I've tacked on two compilation appearances as well, all listed below.  Some of the only pertinent details on the group are included in an online article regarding the Leanies record label, Meltdown. The band's lineup includes brothers Alan and frontman Lindsay Gregg, the latter of whom I sadly  learned passed away in 2011.  Post-3LM, Alan went on to the considerably more renown Mutton Birds.  If any of the surviving members of the band happen to read this, do get in touch.

One last detail.  The album jacket is the work of one Fane Fawes, whose exaggerated style is almost mistakable for that of Ralph Steadman, Hunter S. Thompson's art collaborator.

plus:
Happy (from Weird Culture Weird Custom)
Industrial Sunset (from Melt Down Town and Out of Control, 30 Years on Radio Massey)

oh I was a member https://www.facebook.com/greg.malcolm.7

Hehehe. I was the drummer. Good times. Greg was the other front man.

Hey, thanks for checking in. Please feel free to email me (addy in my profile).

Is there a chance of a re-up please? Many thanks.