Ok, one last present to finish the holiday off, and a pretty substantial one at that from a band that needs no introduction - at least I would expect that to be the case.  Can you believe it's been ELEVEN YEARS since I dedicated an entry to Material Issue?  Maybe I just didn't want you to get burned out on them.  Then again this is the trifecta to end all power pop trios we're talking about here - Ted Ansani, Mike Zelenko, and of course the late Jim Ellison.  I guess there isn't much of a burnout factor there, eh? 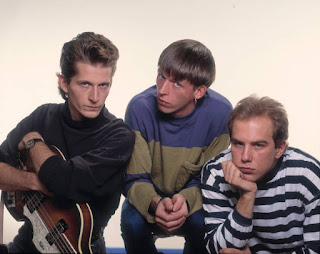 Issues is nothing more than a fan-curated series of bootlegs compiling scarce, unreleased and live stuff from Chicago power-pop demigods, you guessed it, Material Issue.  You'll no doubt notice the header states this is Vol 3.  You might be asking, are there volumes one and two?  Do subsequent chapters in the Issues serial exist?  Yes, and yes.  Currently I don't have all or even most of them, but I might try to work on that.  Furthermore, from what I've been able to learn about these MI compilations, Vol. 3's emphasis is on studio material, that in one iteration or another isn't readily available for public consumption.  It touches on songs from their debut, International Pop Overthrow, but the emphasis of this volume tends to zero in on their pre and post major label stint with Mercury Records.  Best of all it includes some entirely unique and unreleased cuts that to my knowledge have never appeared on any official MI releases.  Let me fill you in if I may.

Issues Vol. 3 commences with a spate of some of the trio's most nascent tunes, pulled from demo tapes circa 1985-86 that may or may not have made it into the public realm.  "Why," "I Want You" and "Walk Into the Fire" never carried over to proper MI records, but we get to hear early previews of a couple that did - "Chance of a Lifetime" and "Echo Beach," both of which would eventually become fan favorites.  These are followed up by not-so-different-from-the-album takes of bona-fide hits, "Valerie Love Me," "Renee Remains..." and the always zingy "What Girls Want."  Next, a cover of Tommy Roe's 1969 hit "Dizzy" is credited as an IPO outtake.  No complaints there.  "Bones" isn't a MI song, rather a track by an unrelated combo, Slink Moss and the Flying Aces that Jim Ellison contributed vocals to in 1995.  This is followed up by three songs that are placed under the umbrella of  "AMX demos."  Cut in 1996, the AMX acronym translates into AKA Material Issue, per this relevant blog post.  "Carousel" wound up on MI's posthumous Telecommando Americano, but "Quicksand" and "Blue Is for Boys" have been lost in the ether...until now.

The bulk of the remainder of Issues 3 is comprised of demos for Telecommando Americano.  Some of which are virtual mirrors to the album versions, but the nuances and differences are there, like in the guitar fills on "What if I Killed Your Boyfriend?"  I honestly have to wonder if the MI fans that dropped off after IPO were even aware of the existence of this album, as I usually find no one but die hard fans ever mention it.  That's a shame, because "Satellite", What if I...," and "You Were Beautiful" are as stimulating as anything else in MI's sturdy power pop canon.  BTW, "Mrs. Beautiful" is another outtake, and a decent enough one at that.  Things close out with Material Issue concocting an ad for Budweiser, which I don't believe ever made it to Sunday afternoon TV, but who knows. 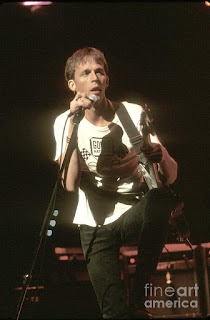 I ponder a lot about about the late Jim Ellison and moreover what might have been if things had taken a different turn on June 20, 1996.  If you're a fan you've probably gleaned the synopsis (or what little thereof was made public knowledge) of what played into his final act of desperation.  He died a veritable martyr for his cause, but still a punishing excuse for the rest of us.  And in light of what transpired that day, all Material Issue songs, even the most strident and jovial ones ache to one extent of another whenever I hear them.  Even if he had never recorded another note, had he simply been able to persevere through his circumstances that would have been satisfaction enough for me.  Jim, you were seemingly too misanthropic to be sentimental, but nonetheless we miss the hell out of you.  Tracklist and links are below.

Whew. Another amazing week-plus of holiday greatness. Thanks again for all the hard work you put into your blog. This year sucked like no year has ever sucked for me, but there were little oases of happiness... this blog being one of them.

Oh, and if you're still on the fence as to whether or not you should collect Issues Vols. 1 and 2... yes, yes, yes, a thousand times yes!

Have a great holiday season!

You're always welcome Don. Thanks.

Thank you, as always, for discussing and sharing such great music! Wishing you a Happy Holiday season! Mike.

Thanks for this. I so rarely find Stuff by my favorite band that I don't have! It made my day!!!

Thanks for this! I'm a huge fan and saw the band twice, and they were unfailingly great!

I'm looking forward to hearing this. As a suburban Chicago punk in the mid-80s, I snuck my tape recorder into a couple of shows where they opened and recorded them in '85-'86. If I could ever get it together to transfer tape to digital I will send you what I have if you're interested. Jim also gave my band it's first show in 1989 at Exit in Chicago. He was a super nice guy and good to me and my band. He is missed for sure.

Thanks for spreading the word of Material Issue. The remaining members have mostly moved on now--they've done some reunion shows and some of them are on Youtube.

Not sure what's on Volume 1 or Volume 2 but it's probably stuff that was cribbed from a fan compilation called Boys Makin Noise. Some of my collection was featured on that six CD set, but I didn't compile it. The album covers are here:

If anyone wants me to post that set (or give them to Wilfully Obscure to host), I am happy to so.

I'm a bit of a completist, so @geoffrey greenberg I would LOVE to transfer those cassette to digital. I too met Jim several times and he was always super nice to me.

Thanks for another great year of amazing discoveries!

And the one you posted here I think it's the best one.

Yeah but I think they are all live discs beyond Volume 6?

Someone is Kickstarting a Material Issue documentary...

The more Material Issue, the better. Could you post Telecommando Americano if you have it? Thanks spavid.

Hi all, I stumbled across this blog whilst looking for GTYP Live In Chicago.

Being over 20 years late to MI and being from the UK is making it difficult to track it down.

I appreciate this is a rather long shot but could anyone point me in the right direction at all please?

Loving the blog, picked up on lots new stuff I didn't know existed.

What are you looking for Neil? I'm sure I can help you out.

Hi thank you for your response.

I'm after live in Chicago in mp3 or CD.