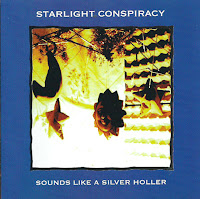 Crunchy and often shoegazer-y indie rock this way came from the presumably long defunct Starlight Conspiracy.  Apparently hailing from New England (Mass or Vermont I wanna say) this co-ed quartet featured Jan Tofferi, largely dominating on vocals.  Bearing a raw, mid-fi aptitude the Conspiracy had an unwieldy grip on dynamics and an even better handle on distortion.  Downcast but never despondent the band's serious tenor was more substance than angsty theatrics.  Silver Holler is Vaguely analogous to early Velocity Girl, especially on the more melodic bits like "She Waits," and "Just Heavier Words." Kind of wish they stuck around for another record or two.

Thanks for sharing this, I had forgotten about this one.

They were from Burlington VT. Brad from bradlysalmanac.com was a member and he has shared some additional tunes on his website.

I didn't think to look if this was on Bandcamp. Anyone associated with the band, just say the word if you need me to kill my link.

Great post and thank you for all the great music that you have posted over the last 12 months,
Seasons Greetings and all the best for the New Year