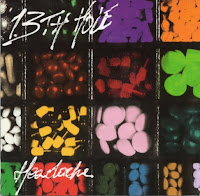 This hasn't been a banner week for content folks, and while I plan on treating you to some long requested uploads in the immediate future, I present to use this festering, surge of guitarsy, art-noise glop.  There's some serious early-Sonic Youth caterwaul-cum-distorto Jr. slurry emanating from the golden throats and calloused fingers of this co-ed, French air-parcel, who had the balls (and ovaries) to affix the unluckiest combo of two numerals to their moniker.  Residing amidst 13th Hole's gooey, fever-dream sensory-overload antics, you'll find traces of discernibly tuneful fretboard maneuvers that for better or worse still fall short of "pretty."  In fairness, "Wave" borders on hummable (in the most relative context possible), and elsewhere we stumble on some shoegazer -y outcroppings that all of you dream-pop noiseniks in the audience should harbor at least some faint appreciation for.  More 13th Hole offerings would ensue, predominantly in the current millennium, all of which appear to be soaking up bandwidth on Bandcamp.  Headache, however, can only be streamed on said music hub, so dare I say Wilfully Obscure is the only downloadable source for this flagrant hot mess?

Hi there, can you, please, possibly re-up the album "The Semantics - Powerbill" and the Owsley discography? Thanks in advance.