I've never been much of a hardcore guy.  Punk yes...but hardcore?  I need way more than indiscriminate speed and shouted vocals, regardless of the righteous indignation and moral outrage that might inform that type of music.  No, in order for me to enjoy anything remotely hardcore there has to be at least one other ingredient in the mix.  With Bad Religion (at least in their second iteration starting in the late '80s) it was melody.  Another exception for me might be The Germs, who offered some unique and indigenous tangents that I can't quite convey in the written word.  And the Circle Jerks and Adolescents packed such an irresistible thrust and groove that even I was forced to let my guard down. 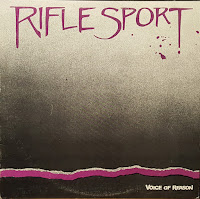 So where am I going with all this?  Minneapolis' Rifle Sport were a band that could have taken the generic hardcore route with their first album, Voice of Reason, but instead opted for a slightly modified path.  Never heard of them?  Since this band was a strictly pre-internet proposition biographical details are meager at best, and even my own personal insight borders on minimal. I've featured a couple of their later albums (Primo and White) previously, but the record I'm featuring here is considerably more crucial.

No, Rifle Sport weren't casting their gaze on the likes of Minor Threat or 7 Seconds, sacrilegious as that may strike some of you.  They had something more interesting on the brain, specifically the rhythmic variant of post-punk that Mission of Burma was pumping out around the same time.  And not merely the rhythm and meter, but more significantly the sweeter guitar tones the Burmas, and kindred west coast spirits Middle Class were doling out.  Sure, Voice of Reason sounds a bit dated in 2018, but the four gents responsible for this record were on the cusp of something fresh and stimulating rather than confrontational. Things aren't rampaging here at a million miles an hour, but these guys were frenetic as hell.  If you're anything like me, you might pick up on glints of Joy Division, Pere Ubu and Talking Heads, the latter of which is particularly evident in the vocal department.  Voice... may not qualify as a masterpiece, but it's always sat well with me.  Give 'er a spin.

thanks, been looking for this for a while

Glad I could help.

Out of dozens of bands, Rifle Sport is one of the two favorites you've introduced to me since i started following this blog a few months ago (The Figgs would be the other). And now more material posted by both in just the last week or so. You are the gift that keeps giving. Best Hanukkah i've ever had (being a goy, it's also the first Hanukkah, but hey, i like it more than Christmas now!)