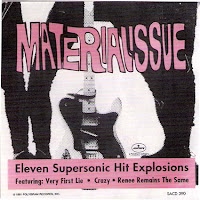 Imagine the excitement of being a music director in 1991 (preferably at a college radio station) and having this promotional-only Material Issue CD fall into your lap. Issued in conjunction with Material Issue's iconic power-pop classic, International Pop Overflow, Eleven Supersonic Hit Explosions never made it's way into stores (with the rare exception of used shops, only by virtue of ignorant and/or unappreciative twits, swapping it for the new Garth Brooks album). Eleven Supersonic's enticement is that it contains practically another album's worth of songs unavailable elsewhere. Leading things off are three "emphasis" cuts from International. The gravy officially kicks in with a cleaner-than-clean acoustic take of a key LP track, "Diane." Three of the eight non-LP cuts are covers - "The Boxer" (Paul Simon), "Blockbuster" (Bay City Rollers), and "Cowboy Song" (Thin Lizzy), the last one being a butane anthem for the ages. There's also a re-recording of their debut EP's "She's Going Through My Head," a live version of "Valerie Loves Me," and a couple more LP outtakes. To say that this 11-song promo CD was a "treat" would be a colossal understatement. Enjoy!

Thanks for putting this up! Quick correction -- "Blockbuster" was Sweet's only # 1 UK single. Jim Ellison was a major league Sweet fan (hence, the line "she knows the name of my very favorite Sweet record" in "She's Going Through My Head") who booked them (well, a version with two original members) for a gig at Cubby Bear in Chicago. One of my memories of that gig was watching Jim rocking out at the side of the stage.

I loved that first album when it cam out of nowhere during that sleepy era.

Oh man, You made my week with this! I've been a fan ever since I spun International Pop Overthrow on my high school radio station. I got to see them a couple of times while in college. I'll never forget Ellison's snarl. Thanks so much. What a gem!

Music director of a college radio station in 1991? Check! WPGU! And I still have my slimline jewel case of this MI CD to prove it. In fact...I still listen to the damn thing from time to time. CDs by nearly every other band I got at the time - long gone (though over all, I think 91 was a pretty great year for college rock).

what a fantastic band!by the time id discovered them the poor fella was gone;-(None of the cds of theirs i just recently listed on Ebay sold either, which proves that some of the very best bands ever,,remain obscure!

Freak City Soundtrack(and the yellow album,the name of which escapes me) absolutely rules!

Joy in warcraft leveling living comes wow lvl from having wow lvl fine emotions,wow power level trusting them,power leveling giving them power leveling the freedom of wrath of the lich king power leveling a bird in the open.wlk power leveling Joy in living can age of conan gold never be assumed as a pose,or put on from guildwars gold the outside as a mask. People who have this joy don not need maple story mesos to talk about it; they radiate it. wow gold They just live out their joy and let wow power leveling it splash its sunlight and glow into other lives as naturally as bird sings.

Thanks for sharing it. I think that there are a lot of materials that can see the light of the sun because of different situations that same happen with Generic Viagra that their album never were released.

Thanks for the Eleven Supersonic Hit Explosions. Been looking for it for a long time...:)

Looks like the file has been deleted. Would love to hear this, if you could possible re-up, please and thanks!

Could this please be re-upped? It would be most appreciated. Thank You!!
-Chris

This MI rarity has been re-upped!
https://www40.zippyshare.com/v/ijuHDjfU/file.html

Sorry I am late for the party. Is it possible to re-up this rare piece of music? Many thanks