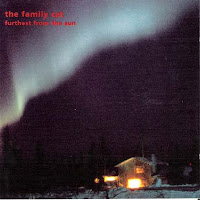 As far as music in Britain went in the early to mid '9os, The Family Cat was something of an anomaly, if only because they didn’t subscribe to the Madchester or shoegazer temptations of the day. The laziest comaprison I can conjure up is the Jesus and Mary Chain, but without all that hair in their faces. Furthest From the Sun, is an untrendy, unsexy post-post-punk album, to nail a genre to it. More poignantly, it's sonically impressive, possessing a sense of dynamics that sounded out of place then just as much as it does today. It''s faint psychedelic, swirling guitar fills derive just as much from Television as The Chameleons. The sublime "Steamroller" is arguably the centerpiece here, with it's mesmerising organs and dense arrangement, that's should ideally be experienced with a big pair of headphones.


This is the special limited edition version of the album, featuring two bonus cuts, " Kolumbus," and "Montague Terrace (In Blue)"

Get it from Emusic and iTunes.
Posted by spavid at 6:49 PM

Loved this. Have you got any more (earlier) Family Cat?
Also I would love some New Fast Automatic Daffodils if possible.
Enjoying the blog.

...any chance of re-upping this, as it is blocked @ rapishare???

...I would be forever grateful!!

Hello Wilfully Obscure,
Congatulations for the blog...
Excellent music & information of '80s & '90s...
The Family Cat is a band of the DEDICATED RECORDS LABEL, and mixed very goog THE NOISE AND MELODY...
MUCH INFLUENCE OF THE EIGHTIES (POST PUNK, GOTH, DREAMPOP)
BUT
THE LINK IS FIXED...
THE FILE NOT FOUND...
PLEASE, YOU COULD RE-UPLOAD THE FILE?
REGARDS FROM LIMA,
THANKS FOR ALL,
JOSE

Hi Wilfully Obscure, please re-upping this album, file not found...???????
Please, the great band is my favourite... Thanks friend,
Ricardo

I will never get bored of listening to this album :)