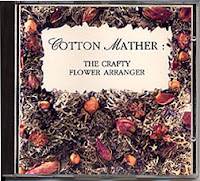 I hesitate to post Cotton Mathers' s rarer than rare, The Crafty Flower Arranger for a number of reasons. Number one I don't own an original copy, or even possess a burned copy from an original. Number two, the best rip I was able to locate on MP3 sharing sites was a paltry 128 kbps, half of what I personally rips my CDs and records at. Strangely enough, I was able to find this at a slightly higher bit rate on Soulseek, but with much inferior quality than the 128 kbps version I'm hosting. Finally, and most significantly, this is an ethical dilemma. The eight song CFA was never intended for public release, rather as a tool to book shows in the Austin, TX area, where Cotton Mather resided. Some people might refer to this CD as a "vanity release," and by and large that would be accurate, taking into account it's scarcity and the cherry-picked audience it was targeted for. No one perhaps the band knows exactly how many copies were pressed, but estimates are in the low hundreds - if not less than a hundred!


If you like Cotton Mather, or for that matter have an inclination for quality guitar-pop in general, then it's a safe bet to say that you love/will love their debut album, 1994's Cotton Is King. The Crafty Flower Arranger is effectively a CD of demos for that very record, making it no small object of intrigue to die-hard CM fans. Only three of the tracks would latter appear in slightly modified versions on Cotton Is King, and five others ("Asterisk Man," "Listen to the Angel," "Spellbound," "Ship Shape," and "I'm in Debt") are 100% exclusive to this coveted, five inch circle of aluminum. Simply put, the full-length album that these eight tracks were the appetizers for, transcend mundanely termed "power-pop", "indie," etc. Cotton Mather would record two more albums, Kontiki and The Big Picture, and while they imbued all of their music with class and wit, they never were able to match the magic and moxie of Cotton Is King. For the uninitiated, hearing is believing.
If anyone associated with Cotton Mather objects to this post, please contact me. I might however ask why you would want a record of this caliber and scarcity removed from the public domain. As a shout-out to the band, I hope you will consider reissuing Cotton Is King, along with the tracks from CFA as a bonus, or for that matter a separate release.
Incidentally, I was able to swipe a jpeg of the cover from a listing for this CD on Ebay, some four or five years ago. So far I as I can tell, it hasn't reappeared since. Enjoy.

Wow! I am stunned to find this here! I am a long time fan of Cotton Mather, and own all of their other releases. I had heard about this, but never had actually seen (much less heard) this one! A truly great band.

CM fans need to check out the latest release from front man Robert Harrison's new band Future Clouds and Radar. It is great.

Thanks again for this...

if you have anymore cotton mather stuff, preferably full-lengths, let me know. i needddddddd them!

Nice blog. The spavid id was a dead giveaway!

Didn't I sell you some of these?

I still have the cassette version of this - they sold copies at local record stores. I actually prefer this to Cotton is King. Thanks for posting these tracks - I've never been able to find a CD copy.

I have some Cotton Mather albums on my Listen The Silence Blog.

here are some links:

YAY! I've been looking for this, thanks so much for posting :D much appreciated!

Just log in to the site http://www.fleurdelisflorist.co.uk and have a peek into the attractive and fragrant flowers stored herewith, including casket sprays, wreaths, posies and all other types of flowery arrangements. This website serves as a platform for the best florists in uk to sell their flowers at an unbelievably affordable price and as soon as you place orders with this site, the best flowers would be delivered to you at the earliest convenience.

You can buy eye-catching flowers and floral gifts from a range of online destinations but only florists in UK can provide you the best deals on flowers. Get in touch with http://fleurdelisflorist.spruz.com at the earliest and avail striking discounts on exclusive floral arrangements.

wonderful to find this and the link still active 4 years after the post!

I have their 3 albums, but was unaware of this until today.

Wow, fantastic find, this is really rare, I love the music. Anne@silk bouquets

While going through some of the 1,000's of CDs I have, I came across a copy of "The Crafty Flower Arranger" by Cotton Mather, which I must have picked up when I lived in Austin, TX. The last page of the front insert/booklet says this is an "Advanced Radio Copy for Promotional Use". Does anybody know if all of the releases for this CD are marked this way?

I also found a copy of "Cotton is King" in my collection - guess I had better give them a listen!

Here's the copy I got on P2P years ago with a 320 kbps rip plus the full cover and insert scans. Enjoy!!