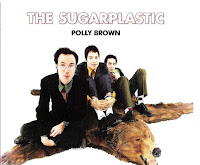 If I had to boil it down to one single artist that was the essence of Wilfully Obscure, it just might be Los Angeles' long-running Sugarplastic. With their wry, XTC-ish (a lazy and obvious comparison, I know) sensibilities and esoteric wit, the Ben Eshbach and Kiara Geller-helmed Sugarplastic are one of the most curious and intriguing "pop" bands to have ever snagged a major-label deal. It was 1996 when the 'plastic grasped for the brass ring, resulting in their sophomore album, and Geffen debut (and finale) Bang, The Earth is Round.

The four-cut Polly Brown single however, did not see any domestic release. From my keen observations, I estimate that no more than a few hundred copies made it to American shores, outdone by it's sheer scarcity only by the band's triple-7" box set on Pronto Records, and the "Sheep"/"Superball" 45, that was limited to a mere *gasp* 200 copies! Read 'em and weep. There are two LP tracks here, "Polly Brown" and "Another Myself," as well as "Where Dead Bullies Go," which previously saw the light of day on a Minty Fresh Records 7" (and later on a CD compilation). So, the real curiosity here is "Daisy May," that thus far hasn't appeared anywhere else, including the Sugarplastic's b-sides and outtakes Japanese import, Primitive Plastic. Now that's what I call quite rare.

Unless there are any objections, look forward to future Sugarplastic posts. I'll even take requests. Enjoy (or not).

hi
any chance of posting more sugarplastic
do you happen to have a jpeg for the ottawaw
bonesaw cover?
I have a few rarities floating around...

You can get in touch with me by going to my user info. I'll see if I can hook you up.

they're on tallboy records now:
http://www.tallboy.com

very nice i love sugarplastic and didnt have that track...what other gems by this fine band have you got i wonder

I snagged a copy of the Polly Brown single off of eBay.

I'm still looking for a copy of the Pronto Box.

I just flat-out love The Sugarplastic. They are (seriously) one of the best bands in the country. All of their albums are great, and I'm waiting with bated breath to hear the new one.

Any idea if there's any decent live stuff floating around?

This is probably not my place to say, but what the hell.

Pretty much every Sugarplastic live show (at least in L.A.) has been recorded in some way. I run their record label, but don't have access to the live stuff directly.

There was a live track on the bonus cd that was sent to 7X7X7 vinyl subscribers. Beyond that, I have been trying to get them to weed through the live stuff and put a few things out, but Ben and Kiara are very busy with other projects.

Ben offers downloads of some things on his personal site, linked from the theSugarplastic.com site.

Hope this helps a little.

The link is dead now, any possibility of reviving it? I'd love to hear these tracks. Thanks. :)

Have to comment on your comment, "If I had to boil it down to one single artist that was the essence of Wilfully Obscure, it just might be Los Angeles' long-running Sugarplastic."

Well, I can say the same thing for my work with Not Lame Recordings and you can just insert NLR where you have, Wilfully Obscure.

Fortunately, you have done such a great, GREAT job over the years to cover the band here at WO, I don't have to. I just refer any potential fan to your work. Done.

I have adored this band since 'note 1' when I picked up the "Ottawa" vinyl box set in '94. From there, when NL started, I became friends with their label guy, Doug Tull of Sugar Fix and he was gracious to let me sleep on his couch with my early Los Angeles forays in the mid-90s working on all things 'power pop'.

I saw the band live a handful of times in LA. Every time, I was front stage, jumping around in geeky awe, actively playing air guitar and drums, making a general fool of myself. I'm sure there's some embarrassing video of me, from that time.

Some fledgling indie record label exec(sic) I was...but I didn't give a rip. I dig a band, I open up and bleed(best Iggy inspired gathering of four word in rock 'n roll, imho)

When they played live, in that moment I was there watching, Sugarplastic were my favorite band in the entire freakin' world. "Another Myself", live? Dear Lord, slayed my soul, each time.

Anyway, just had to chime in as we're of like minded melding of music souls with this band. I can't wait to hear some of Ben's classical constructions when they start to make it out into the world. They'll be genius. That I'm sure of.