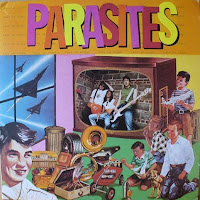 In the spring of 1994, The bay area Parasites quietly released Punch Lines, an album as infectious, commanding, and endearing as any pop-core band could ever hope to mastermind. It's out of print, but if you can snag a copy, I predict you'll enjoy it as much, if not more so than any given Descendents or Green Day platter. Punch Lines, wasn't their debut, but Pair of Sides is. Once I was able to lift my jaw off the floor back some 13 years ago when I became enlightened about Nikki (aka Dave) Parasite and his crew, I immediately made a point of tracking down their earlier releases to find out what I had missed the first time around. There were a bevy of great singles, but most of were in the hands of collectors. Eventually, I came across a sealed copy in of Pair of Sides a dusty record rack in upstate New York. With Punch Lines being the seismic experience that it was, my expectations of their debut were cautiously optimistic. It certainly didn't have the agility and melodic structures the Parasites would later develop, but the energy and dysfunctional aesthetic were hemmed well in place. More importantly, Pair of Sides, was a fun record of minute-and-a-half, Ramones-y indebted rock and roll. Besides Punch Lines, the Parasites would release only one more proper album of all-new material, but there were plenty of excellent stop-gap disks in the interim that are worth investigating.

It appears that the Parasites have gone on permanent hiatus. Rumor has it that roughly 50 different musicians have passed through the Parasites lineup over the band's 15-year tenure, with Nikki (aka Dave) being the loan constant. Incidentally, Pair of Sides was a vinyl-only release. Doesn't that make you feel special?

Fantastic. Love the Parasites. When I was a young teen I thought Mcrackins ripped off Screeching Weasel. Then I heard the Parasites and was a little more enlightened. What a good band.

Thanks I sold my vinyl copy years ago and regret it now.

You're linked on my blog.

thanks to both of you! and i thought this was going to be an ignored post. will check out the blog jeffen.

This actually did come out on CD a few years later, but some of the tracks are missing - namely the "Ronnie" songs, which are pretty easy to identify (read - less melodic) when you give it the original LP a listen. Dave added a some other songs to fill things out though. Alas, the CD is out of print as well.

this album's fantastic. i really miss having it. you should post MEDIAFIRE links though. rapidshare sucks.

Always been a Parasites fan but never got a chance to listen to this album until now. Love it! The first song is amazing.

Any chance of a re-up for this one please ??