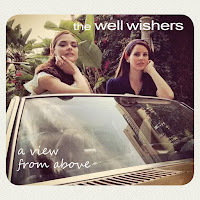 When you've a proven singer/songwriter and you've situated yourself on a solid, power-pop bedrock, worthy of icons ranging from the Posies to Shoes, and even Sloan, the only logical place to go is down...right?  At the very least consider The Well Wishers fifth full length salvo, A View From Above, a lateral move with intermittent imaginative spurts.  For all intents and purposes, the WW is a one-man show, namely Jeff Shelton, whose been at this game for the better part of three decades, beginning in the mid-90s helming the Spinning Jennies, and this isn't the first time I've covered his music.

Shelton is a stickler for the line-drive approach to performing - a defiant straight shooter armed with a cascade of fuzzy power chords and linear but earnest sentiments.  It's not the most innovative formula, yet "I Like You Better" and "Never Let You Down" are pulled off with an airtight acumen a lot of his peers would be envious of, if only for the fact that he makes it look/sound So. Damn. Easy.  By and large, A View... is cut from the same cloth of earlier WW records like Comes and Goes and Dreaming of the West Coast - so much so these albums sound indistinguishable.  But just when you think he's content to stay on the straight and narrow, we're graced with a few tangents, the bulk of which crop up on the album's second half.  The rumbling "Is it Me, Is it You" plugs into the ballsy swagger of early Cheap Trick, "Ways and Means" is a subdued slice of lilting jangle, and "New Fade Out" eschews the power pop penchant almost altogether in favor of a something distinctly more contemplative than what we're accustom to hearing from Shelton.  All and all, not a bad place for WW neophytes to jump in, and there's plenty here to keep his loyal listeners piqued.

A View From Above is available as we speak via Bandcamp, Amazon and iTunes.
Posted by spavid at 9:05 PM

Thank you for reviewing this album. Jeff Shelton is a semi-friend from my old days in the SF Bay Area, when my friend Paul and I were attempting to build a new pop festival from the ground up. We didn't succeed, but we did have three years of awesome shows combining new and old pop masters (we reunited the Beau Brummels for one night, and we got the Electric Prunes back on stage after years of being away). And in the process of entrenching myself in the local music scene, I got to know Jeff. He *loves* music, and he *really loves* power pop. He's a hustler, and he does whatever it takes to get his music heard. If anyone reading this enjoys indie power pop, give him and his band(s) a listen.

You pretty much nailed it Pernt. Jeff is "pop" to the core.