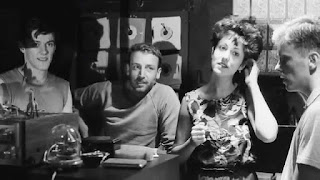 Like most Joy Division fans, especially Yankees like myself, my discovery of them came significantly after the passing of Ian Curtis.  My connection to this posthumous demigod was likely similar to a lot of yours, having absorbed his catalog during my tumultuous teenage years when I was hit with the triple whammy of romantic despair, existential awareness, and that yearning, burning desire for more independence.  Loved Unknown Pleasures and it's surrounding singles, but thoroughly hated JD's listless, barren second LP, Closer with a red hot passion.  New Order arrived on my radar first, as back then they were at the height of their viability, churning out smart synth-pop salvos like "Bizarre Love Triangle."  It was a little later on when I was exposed to their immediate post-Joy Division endeavors that really made me a believer.

This brief collection of songs constitutes New Order's first recording session, tracked about three months after Curtis' suicide, with a lineup consisting of the surviving three quarters of Joy Division - Bernard Sumner, Peter Hook, and Stephen Morris.  This is New Order in their most sullen and undiluted form, at least two years before certain elements in the record industry "persuaded" them to adopt a cheerier and more commercial tenor.  My two favorite N/O songs materialized from this era - "Ceremony," and "Dreams Never End," and it's a treat to hear these clangy, soon-to-be post-punk songs in their initial stages of development.  "Homage" and "Are You Ready..." were never revisited again, at least not studio-wise apparently.  This is quite literally mourning through music.  Below are some observations from the individual who posted these on the torrent site I procured them from.  And yes, this particular batch of tunes has been bootlegged profusely over the years, but the audio quality here is pretty exceptional.


In these tracks you can still hear the band's emotions in text and music. Different band members took part on lead vocals: Peter Hook on "dreams never end", Bernard Summer on "hommage", Steve Morris on "ceremony" and "truth". Even Joy Division's and New Order manager Rob Gretton took place behind the microphone and sings at the last song of these recordings.

Nice, I was just thinking a couple days ago that i'd like to hear more rare/early NO :)